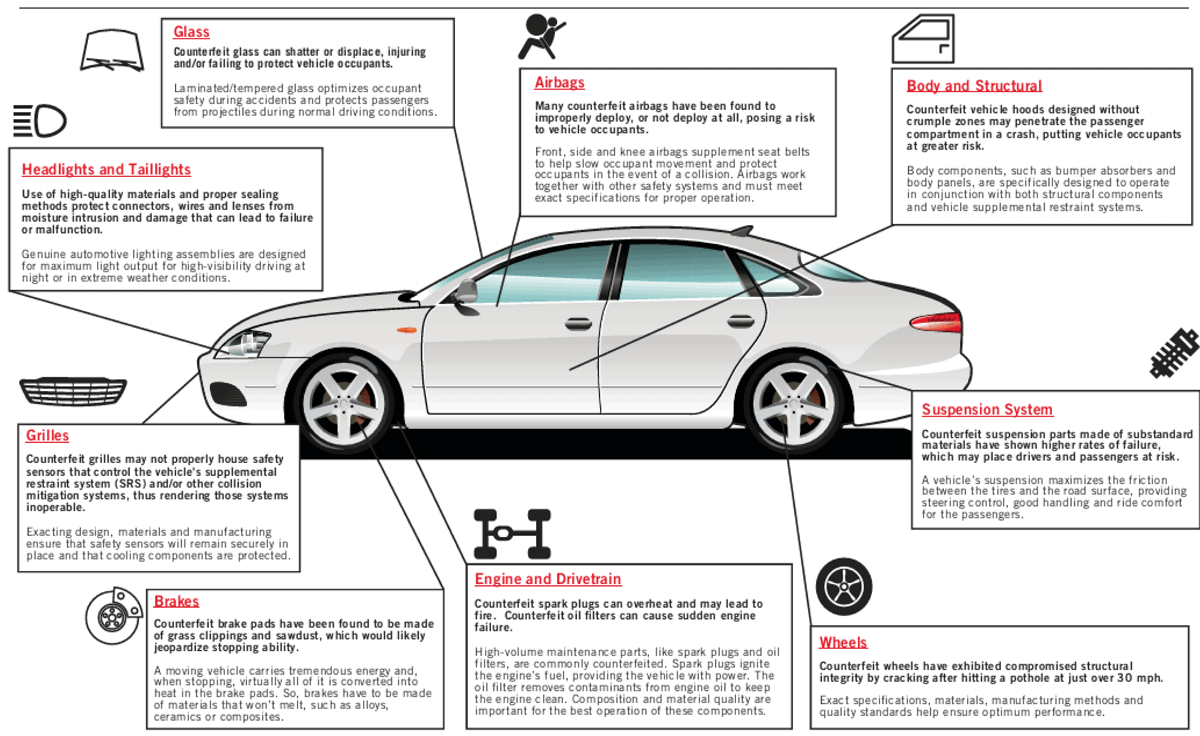 “Almost every type of auto part can be and has been counterfeited,” according to a November analysis by the Automotive Anti-Counterfeiting Council

An increase in e-Commerce sales has largely contributed to the proliferation of counterfeit parts, states a new report.

“Almost every type of auto part can be and has been counterfeited,” according to a November analysis by the Automotive Anti-Counterfeiting Council (A2C2), which is comprised of 10 North American vehicle manufacturers — FCA US, Ford, General Motors, Honda, Hyundai, Kia, Nissan, Subaru, Toyota, Volkswagen Group of America, and their subsidiary brands.

In 2019, there were over 280 million registered motor vehicles in the United States. Online sales of auto parts were estimated at more than $12 billion in 2019, A2C2 reports. As a result, counterfeit automotive parts present a “clear and present danger” to almost everyone in the U.S.

In one incident that the A2C2 highlights, a Dallas woman in January 2017 lost control of her used vehicle purchased just days prior who crashed into a tree and was killed because the counterfeit airbag in her vehicle failed to deploy. According to the accident investigator, instead of the necessary mechanisms that allow proper airbag deployment, a rag covered with silicone putty was discovered inside the counterfeit airbag assembly.

To disrupt the sale of counterfeit automotive parts, A2C2 states it works collaboratively with law enforcement on civil and criminal investigations.

Examples of recent investigations include:

• The target imported counterfeit wheel center caps from China and domestically. Over 375 shipments were imported in a two-year period.

• The target installed caps on non-OEM (original equipment manufacturer) wheels and sold them as genuine wheels.

• A2C2 members conducted test buys of airbag covers being sold online and confirmed they were counterfeit.

• A2C2 members conducted test buys of airbags being sold online and confirmed they were counterfeit.

1. Online marketplaces have taken a hands-off approach to the third-party products sold through their platforms and have created a system with little-to-no verification of sellers, their products or their supply chains. In addition, counterfeiters thrive by taking advantage of the lack of consumer safety laws and regulations pertaining to e-commerce.

2. The burden of policing third-party sellers has been disproportionately placed on brand owners and consumers.

3. Consumers are largely unaware of the scope of counterfeit product offered online and generally trust online marketplaces and the products they make available.

A2C2 has proposed several solutions that online marketplaces must be held accountable for policing the products offered on their platforms and the sellers offering those products.

1. Online marketplaces should implement industry practices to validate the authenticity of the products offered on their sites, just as traditional brick-and-mortar stores have done.

3. Consumer education, both before and after purchase, must be enhanced.