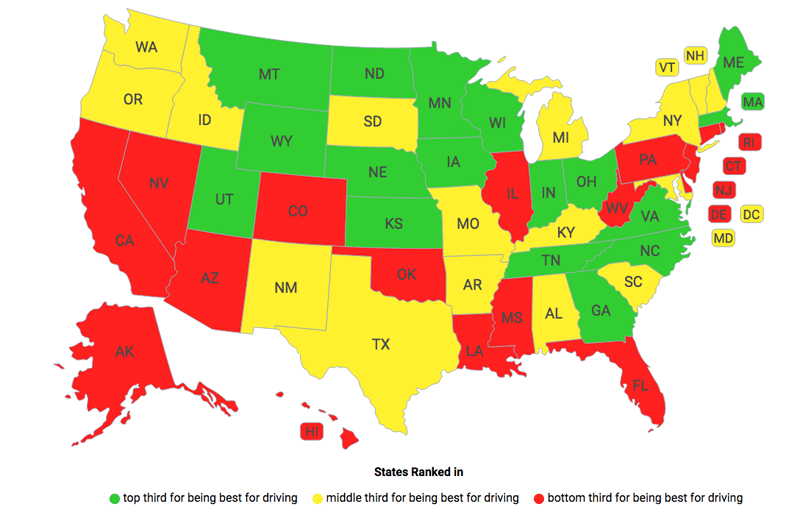 The best and worst states for drivers

Annual extra repair and operating costs due to road conditions, average repair costs and gas prices are few of the calculated metrics used in the study — Utah ranks best, while California is worst

Foster City, Calif.—CarInsurance.com has released its “Best and worst states for driving 2021” report. The study ranks how drivers fare in every state based on factors that they care about most.

The following metrics to assess driving conditions were used:

For the second consecutive year, Utah tops the list because of its better-than-average road conditions, low crash-related fatality rates, and below-average auto insurance premiums. In second place is Minnesota, also for the second year in a row, which was in the top spot in 2018.

The top 10 states for driving are:

While most states in the above list were among the best last year, there were two new additions: Wyoming (up from 17 last year) and Wisconsin (up from 16).

California ranks as the worst for drivers for the second consecutive year because of its high average gas prices and repair costs, traffic congestion issues, and poor road conditions. Next is Louisiana, the second-worst, because of high crash-related fatalities and auto insurance rates. The worst in terms of driving conditions include:

“It’s important to note that no state aced or failed every metric — instead, states may perform well in one area and come near the bottom in another,” said Les Masterson, managing editor, insurance analyst for CarInsurance.

For more details, visit Best and worst states for driving 2021.