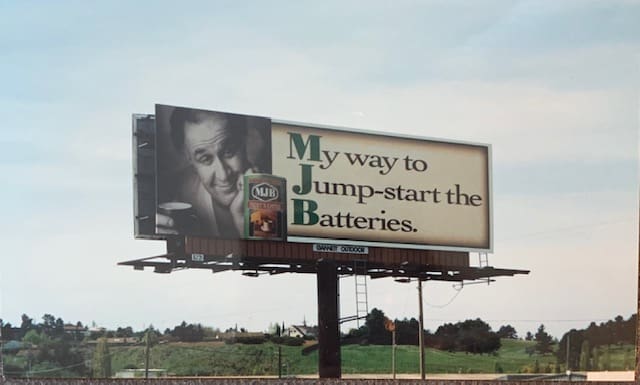 "Long story short, I end up being on billboards around the Bay Area for MJB coffee. I posed holding a cup of coffee with the caption, “MJB, my way to jump-start my battery.”

At about 5 p.m. one day in 1994 a girl drives into my shop in a blue Dodge Dart convertible with the top down. Someone told her that her stoplights weren’t working. So, I look at them. Burned-out fuse. I charge her five bucks, she thanks me, and the next thing I know she’s pulling out her camera and wants to take my picture.

I’m thinking she’s undercover from BAR or something and they want to write me up because I didn’t write a repair order for her. It turns out she’s a headhunter for ad agencies.

She tells me, “I find people who have character faces and put their pictures in my portfolio for my clients to look at and pick to be in their ads.”

Well, OK. So she takes some photos.

I didn’t think much more of it until a few months later when I receive a phone call from her asking me to come down for an audition at a studio in an old warehouse.

So I go down and, long story short, I end up being on billboards around the Bay Area for MJB coffee. I posed holding a cup of coffee with the caption, “MJB, my way to jump-start my battery.”

And before I know it, my customers start calling me because they recognize me. One tells me she almost got in an accident and nearly went off of the road.

This led to five more photo shoots: one for a Canadian phone company, another one for contact lenses, and one for Onan generators. I was even a chef for a restaurant in one, and in one for cable TV which ran back East.

She also used one of my employees in an ad for auto parts in a trade magazine. He was standing there in overalls holding a muffler assembly. He was paid $500. The best part is my dad was there in my shop watching and the producer took a picture of him, too. He ended up being in 16 shoots and being the poster boy for Eddie Bauer one year.

Ten years later someone that worked on one of my ads calls me, because they want to use my shop for a shoot. The reason being my building had nice, red brick walls. They paid me $4,000 for a one-day use of my building.

All in all, not a bad return on an investment for a 50-cent fuse.

The girl in the Dodge Dart who started it all, my agent, was also car-crazy, and liked working on her own car. So, I let her use my shop. I even let her rebuild her engine in her 1966 Toyota Corona Mark II. She was so thrilled it ran after she rebuilt it.

The whole experience is a perfect example of how a very small incident can turn into something so big. It always pays to be helpful to people even in the smallest way, and opportunity can present itself in the strangest of ways.

Next month: How I got to work on President Clinton’s limousine and my interaction with the armed mechanic that traveled with the car.