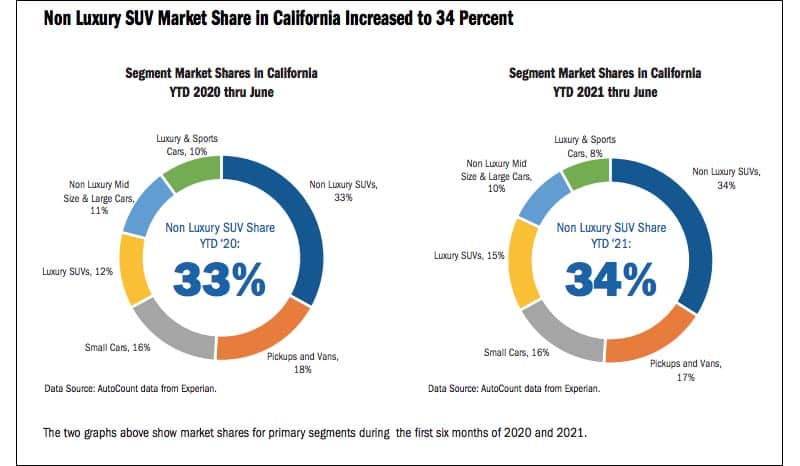 Improvements continue in the new vehicle market, expected to approach 1.9 million in 2021

While still not reaching pre-pandemic sales levels, significant signs of improvement over last year persist. The demand for vehicles is making a comeback and CNCDA expects California’s new and used vehicle market to continue to rebound this year.

COVID’s impact was felt across nearly every industry in the nation and vehicle sales were no different. While 2020 vehicle sales dropped 14.4 percent in the United States, California was hit especially hard, with sales falling 21.7 percent last year.

Despite this drastic decline, the market was still 58 percent higher than the lowest point in 2009 during the Great Recession. According to the California Auto Outlook for the Second Quarter of 2021, sales are expected to increase 15 percent from 2020, approaching 1.9 million units. Absent the ongoing global microchip shortage, units likely would have exceeded two million this year.

“With continued increases in demand, we remain confident in our abilities to continue to provide the same high level of quality goods and services Californians have come to expect from our industry. The safety, health, and wellbeing of our customers and employees will continue to be the top priority for California’s new car dealers.”

The electric and hybrid vehicle market continued its growth in California through the first half of the year. New hybrid vehicle sales saw a 3-percent increase to their share, making up 10 percent of the market, with new electric vehicle sales increasing one and a half percent to 7.8 percent.

Plug-in hybrids doubled their share to 3.2 percent. In the first six months of the year, the market share for these vehicles increased significantly from 15 percent in 2020 to 21 percent through June of 2021.

While the ongoing semiconductor shortage has provided a boost to used vehicle sales, there is a limit on how high used vehicle prices can go. Consumers are incentivized to sell their vehicles due to high resale values, but equally as high replacement costs act as a counterbalance to potential trade-ins.

In the first half of 2021, the Toyota Camry overtook the Honda Civic as the top-selling car in California. The Civic remains a close second, with the Toyota RAV4 an equally as close third, retaining its spot as the best-selling compact SUV with nearly 23 percent of the market segment.

Markets throughout the state marked significant increases in the first two quarters of 2021, with a 35.1 percent increase, statewide. Southern California led very slightly with 35.3 percent to Northern California’s 34.9 percent.

More specifically for selected markets, San Diego County saw a raise in 35.2 percent, LA and Orange Counties an increase of 32.9 percent, and the Bay Area an increase of 29.7 percent.