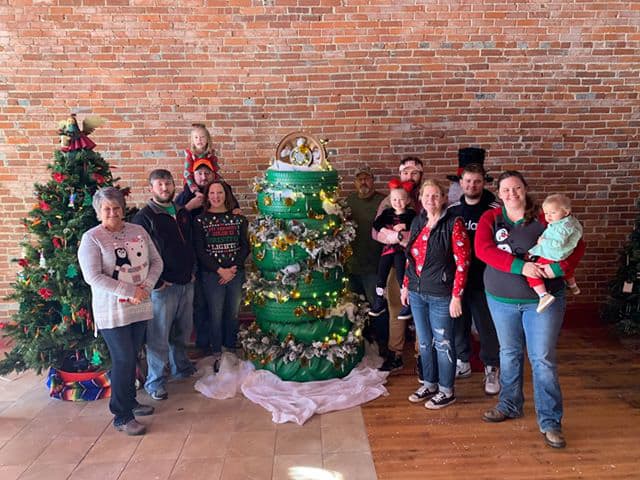 Fort Madison, Iowa—It was two years ago in October that Nannette Griffin decided to greet the holiday season with something a little different for those in need.

“Toys for Tots and food pantry drives are popular community events for the time of year,” she said, “but I came across a new opportunity to fill a need.”

Griffin, who owns Griffin Muffler and Brake, in Fort Madison, Iowa, and who had been recently certified by AskPatty.com, was researching its archives and came across a national diaper drive. It snowballed from there.

“Rather than doing it on a national level, I reached out to our community-action people in town who help the less fortunate,” Griffin said, “and they responded by saying there was a huge need for diapers in Lee County, Iowa.”

She discovered the county is 12,000 diapers a day short, so Griffin, who is also a member of the Chamber of Commerce, enlisted its assistance as well as a local bank. She staged an antique baby crib filled with diapers at her shop and created a social media event to spread the word — within three weeks she had collected more than 10,000 diapers. One man alone delivered 1,500 diapers through his efforts to the bank and Griffin’s shop.

This year, Griffin began the drive campaign a month earlier, though moving forward in 2020 it will become a mission for the newly formed Midwest Auto Care Alliance (MWACA) Southeast Iowa Chapter, for which Griffin is the president, and will include Lee, Des Moines, Henry and Jefferson counties for a broader scale. Its goal is to have the program ready to launch in April.

“We want to have it in time for Mother’s Day in the form of a care package for needy families,” she said. “In addition to diapers, we’ll also include body lotions, shampoos and donations that new moms can use that otherwise couldn’t be afforded.”

In addition to the diaper drive, Griffin began participation in Brake for Breasts this year, where more than 230 independent repair shops across the U.S. fundraise support for research at the Cleveland Clinic Breast Cancer Vaccine Fund.

“By going to Vision Hi-Tech Training every year I met new people in the industry, including Amy Mattinat, a Vermont shop owner, who is a big advocate for Brakes for Breasts and has discussed it at several industry conferences. She helped me get hooked up with it this year.”

Griffin drove donations by offering free brake pads and shoes to customers requiring brake work in October, and 10 percent of the entire bill was donated. She was able to donate more than $1,100.

“Every penny goes right into research,” she said. “We were fortunate to be able to partner with our local AutoZone which provided the brake pads.”

Griffin added that since 2011, the effort has raised more than $740,000 to fund research by two doctors at the clinic who are producing a vaccine. In early 2020, the vaccine is expected to go to bedside trials.

Shops interested in participating in either cause can contact Griffin at griffinmuffler@gmail.com, call her shop at 319-372-2478 or text at 319-470-3922. Information for Brakes for Breasts can be found at brakesforbreasts.com.