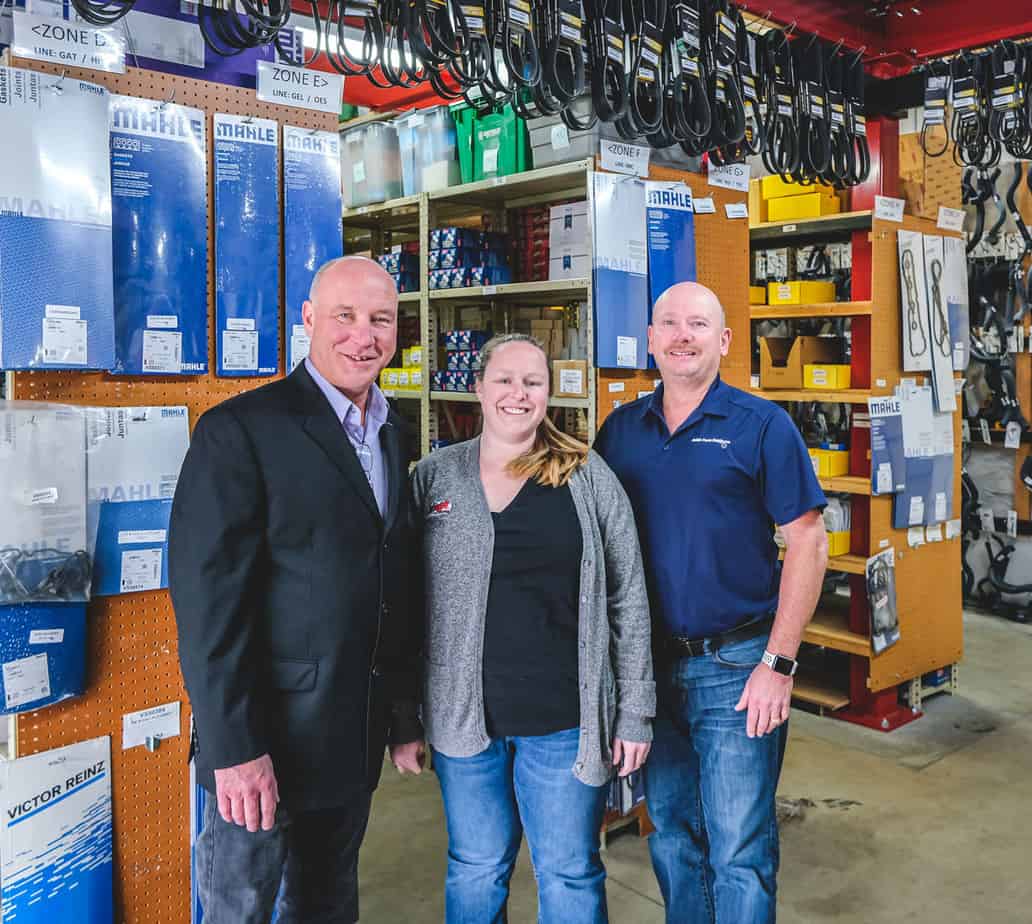 Systems and processes are core ingredients to Greg’s Japanese Auto’s culture and standards, right down to how staff answers the phone

Seattle—If you can’t measure it, you can’t manage it, as the saying goes.

It could well be the mantra of Greg’s Japanese Auto, which has eight locations in western Washington state, where General Manager and Vice President David Huntley drills down into data for shop and employee performance metrics.

Systems and processes are core ingredients to Greg’s company culture and standards, right down to how staff answers the phone, which are recorded for quality assurance and training.

“I want the guys to know what they’re doing on their phone calls,” Huntley said. “There’s four trigger questions: I want them to ask for their name — and did they use their name? — are they an existing customer; did they request vehicle year, make, model and mileage; and did they ask for an appointment?”

Phone calls are then critiqued and placed on spreadsheets outlining when they got an appointment — or didn’t — in order to compare numbers and success rates.

“If they don’t ask for a customer’s name or don’t use their name, the success rate drops from 80 percent to zero,” he said. “It’s night and day.”

‘The Great Game of Business’

Every company employee receives bonuses based on the profitability of their specific shop, which incentivizes them to produce and increase output.

“We take 10 percent of profits and divvy it up between the manager, assistant manager, technicians and driver,” said Huntley, who added that same formula is used at Greg’s corporate level. “When we started the bonus program, ‘The Great Game of Business,’ we had three shops losing money and three shops making money. The program took off and so did our profitability.”

In order to participate in the bonus program, employees meet with Huntley on a given Saturday where he teaches them how to read a balance sheet, profit and loss statements, industry-specific reports, and how to handle customer expectations.

“Our employees have longevity here because they know we care about them … Everyone has a voice and the right to speak up, knowing that someone is always listening.”

“It’s an interesting day that begins at 8 a.m. with a PowerPoint presentation and $50 in one dollar and five dollar bills on the table. We’ll examine P&Ls and I’ll quiz them on items such as inventory monthly sales and the first correct answer receives $5. It’s just a few bucks here and there, but it wakes them up so they’re attentive and they become educated. It’s a lot of fun.”

Huntley also holds managers’ meetings on the third Tuesday of every month to discuss company policies, advertising and marketing, financials and whatever else they want to discuss so long as it’s productive.

“We have a commitment to cooperation and progress,” he said.

Each shop is identified by a specific color code: the Renton shop is dark blue and Bellevue is red, for example, and presented and identified as such during management PowerPoint presentations. All shops are also organized on the screen from oldest to newest.

“We discuss the top three performing shops and service advisors, gross sales, parts GP, effective labor rate, car count, hours per vehicle and all the other metrics. We have a large graph for every service advisor and we talk about the top three, which has gotten everyone to raise their game. We extol the virtues of those who are doing well and it gives the guys a time to shine.”

“Whoever is No. 1 in the Quarterback Passer Rating receives $100, and at the end of the year they are nominated for employee of the year, which comes with a week in Maui at our condo and tickets for two for the winner.”

Greg’s has the advantage of its own parts warehouse that’s a centralized purchasing and distribution center located in Kent. The company buys parts directly from manufacturers, such as Denso, Hitachi, Akebono, Mitsubishi, Idemistu, and Aisin.

“We’re fortunate that we can buy direct, in part due to the fact that we can help them technically with new products and offerings,” Huntley said.

In one case, Greg’s advised Denso that stick coils for Toyotas were constantly failing before the end of warranty to the point that Toyota had leveraged the supplier to provide them free of charge, Huntley said.

“Denso was missing out. We were seeing Toyota stick coil failures in cars just out of warranty in droves. It turned out Denso had built an identical product for Lexus that they then applied to Toyotas. It was a winner for them.”

Greg’s also advised Denso on their relay program and assists Akebono with cataloging.

“We service 21,000 vehicles a year so they come to us because we really work on those parts,” he said, adding that annual revenues average nearly $10 million with 82 lifts. The most recent month’s ARO was $518.

Having a large inventory of parts allows for speedy repairs and happy customers, Huntley added.

“We don’t feel we have the luxury to tell customers we don’t have a part on hand and can’t repair their car. We repair so many cars that we’re in a position to see common pattern failures before anyone else and we can gear up for them in the warehouse, where we maintain about $300,000 in inventory.”

Each shop also maintains a $30,000 to $40,000 inventory of A and B movers, he said, and if the shop isn’t carrying the required part, then it can be delivered from its warehouse within an hour.

“Once a year, we’ll run through the inventories and cull the herd of slow moving parts and increase those that are picking up speed in popularity and use. Last year we wrote off about $1,400 in inventory out of $4,555,000 in sales.”

The inventory is managed by Mike Millsap, who is a master tech and former shop owner that also had a parts warehouse. “He’s exceptionally detailed, extremely intelligent, and has really helped us take it to the next level,” Huntley said.

Huntley and corporate staff are attending an Automotive Parts Associates (APA) meeting this month where they’ll receive special discounts and pick up new manufacturers. They typically run down their inventory in advance of the meeting.

“We became an APA shareholder in 2008 and since then, we’ve grown our manufacturer list from five to 18. It really opened the doors for us.”

Brand specialization is the future

Huntley predicts shops will increasingly migrate toward brand specialization and away from the generalist repair business model.

“They’re going to have to — there’s no way to do it all considering all the different tooling and equipment investment requirements, as well as the technical knowledge needed to go from a Mercedes to a Chrysler to a Honda. I don’t see how a tech could substantially and adequately build up their skillsets and speed.”

“We’re successful because most people don’t like going to dealerships and our customers are accustomed to having the same person hand them back their keys as when they first dropped their car off for service. They like the continuity and appreciate someone who is clean, neat and organized. Organization is key for us.”

Having expanded to eight shops, Huntley advises single-location shop owners who might be considering growing to have cash reserves and stay local for accessibility.

“It’s also important to have a partner. As a sole proprietor, it’s difficult to manage two locations, so find someone who is sturdy and consistent.”

Huntley also works to continuously improve the company’s point-of-sale software with his developer, MaxxTraxx, to expand its capability into multi-locations, which they initially received some light pushback.

“Their bread and butter was single location, mom-and-pop shops, but I told them that was going to be increasingly difficult, because those shops are going to drop away and they’re going to have to target multi-location enterprises such as Firestone and Goodyear service and repair providers.”

The result was multi-location reporting.

“We mine the data,” Huntley said, “and we’re able to upload parts number pricing into the database across the board to all the shops in one stroke.”

Growing the next generation of techs

Training is at the forefront of Greg’s initiatives and Huntley is developing an apprenticeship program that involves the shop’s lead master technicians and a crop of younger tech talent.

“We marry them together with an understanding of how the relationship and training is to work as outlined in documents I created. Compensation is set at $5 for every flat-rate hour that the apprentice flags, so they’re motivated to get them trained-up and help them through tough spots.”

Presently, there are seven master techs who mentor apprentices.

“In the long run, the lack of new, trained talent is what’s going to hold up this industry, as its been reported that 50 percent of all master techs are going to retire within the next 10 years. We’re seeing a dramatic decline in the technician pool.”

Many young techs are hired as drivers from Craigslist and Renton Technical College who don’t want to get into the grind of performing quick-lube jobs, he said.

“I’ll hire three before I determine I’ve found one who is ‘the guy.’ They have to have basic skillsets and character. It’s not a grease-monkey job anymore — it’s now a high-tech and highly advanced industry that can pay very well. The perception of automotive has to get turned around and we, as a company, run very clean, extremely organized shops.”

Huntley added, “Our employees have longevity here because they know we care about them and they appreciate our culture of open-book management and knowing the P&L and balance sheets. Everyone has a voice and the right to speak up, knowing that someone is always listening.”