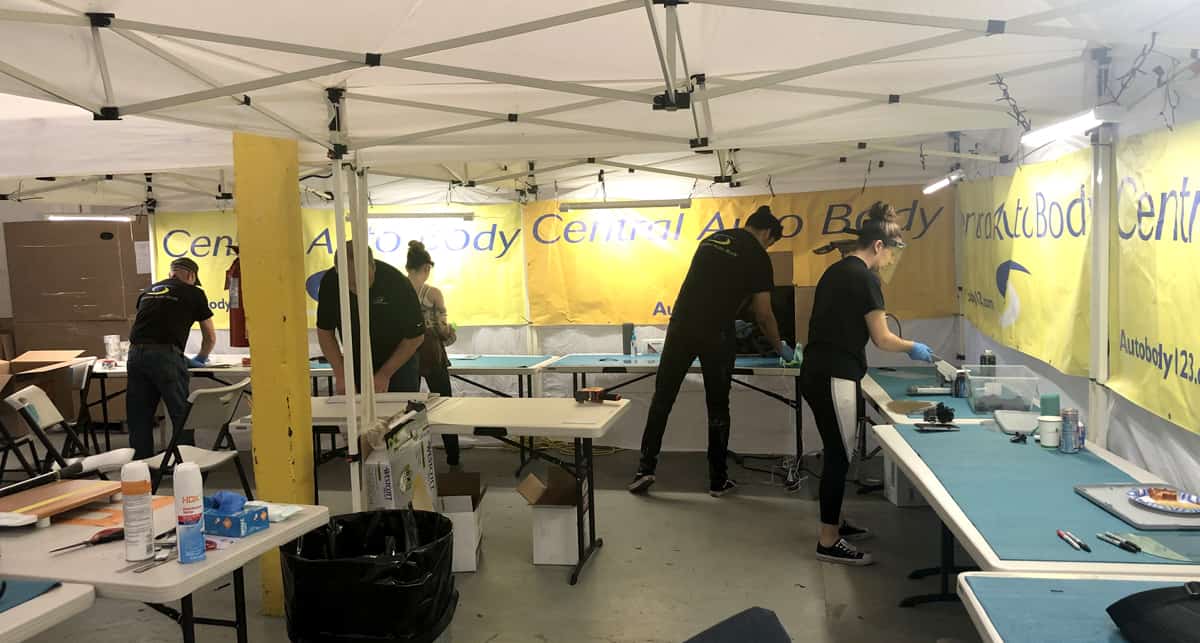 In addition to employees Bret Bothwell has dedicated to the mask and shield production full time, technicians who are repairing and painting vehicles also contribute when they can.

With less cars in the shop, Bret Bothwell says he wanted to save jobs by having his staff manufacture shields and fill a need to combat coronavirus with mask donations

Portland, Ore.—Bret Bothwell’s two sister-in-laws had grown concerned three weeks ago about the lack of protective masks at their respective hospitals where they work. Coincidentally, it just so happens his mother is also a part of a quilting group that could help. And he could, too.

“They had the ability to make some masks, so I asked my mom, ‘If I provided the materials, could you produce some masks to donate to the medical industry?” said Bothwell, who is owner of the family business, Central Auto Body, which has 11 body shops and two mechanical locations in Portland, Ore.

It was just the beginning.

“We never had big intentions, but I soon realized we could do a lot more,” he said, “and we decided protective face shields could also be produced by body techs on a larger level if we provided the resources.”

With less cars on the road and in the shop, and many collision repairers beginning to lay off employees, Bothwell said he thought he could save a few jobs by having his staff manufacture shields and fill a need to combat coronavirus.

Bothwell soon deployed his maintenance crew to prepare and sanitize a 4,500-square-foot building at the MSO’s Powell Boulevard location and make it a production facility.

Bothwell also created a GoFundMe page in order to purchase required materials, while he assumes financial responsibility for the building, electricity, and the employees he has staffing shield and mask production. His biggest production day was the day before Aftermarket Matters Weekly’s interview, when they produced 400 shields. He anticipates they’ll be able to ultimately manufacture 2,000 a week.

The plastic used for the shields is ordered directly from manufacturers because the volume to too large to source locally. The first order was for $3,700, which Bothwell paid for out of pocket.

“We’ve also just found a supplier for the foam used against the forehead in quantities of 10,000 for the shields,” he said. “They cut it for us in half-inch strips which saves a lot of production time — and they gave us a pretty good price. The shield models we’re building off of are approved by most hospitals.”

The shields are being delivered to Oregon hospitals, Meals on Wheels, and others, he said. “All of them have reached out at this point, so we have a lot to make.”

A surgeon at a hospital in Santa Barbara also contacted the shop. “He got coronavirus, gave it to his wife, who is a nurse, and they gave it to their two children.”

The surgeon became aware of what Central Auto Body was doing and reached out for shields for his hospital. “At that time, we had developed a prototype and had made just a few,” Bothwell said. “I sent him a package of 50 shields last week and he’ll give me feedback on them shortly.”

The company also sent masks from Bothwell mother’s quilting group, for which his team places filter inserts into. “I wanted to make a bigger impact, and I figured I didn’t have time or resources to teach my guys how to sew, so I found a Youtube video on how to make masks. I handed it over to my maintenance crew, who developed the assembly line, then I brought in technicians, estimators — whoever I needed to make them.”

In addition to employees he has dedicated to the mask and shield production full time, technicians who are repairing and painting vehicles also contribute when they can.

“If they have some downtime or they’re waiting for a part, they’re excited to help out. Even local body shops are asking how we’re doing it.”

Interest in the process has crossed statelines, Bothwell said. “Quality Auto Body in Eureka, Calif., I believe, is producing 5,000 masks for their local hospital as a result of our conversation with the owner.

“It’s increased our morale here in Portland. Not only are we trying to make a difference, but so are others as they’re stepping up, too.”