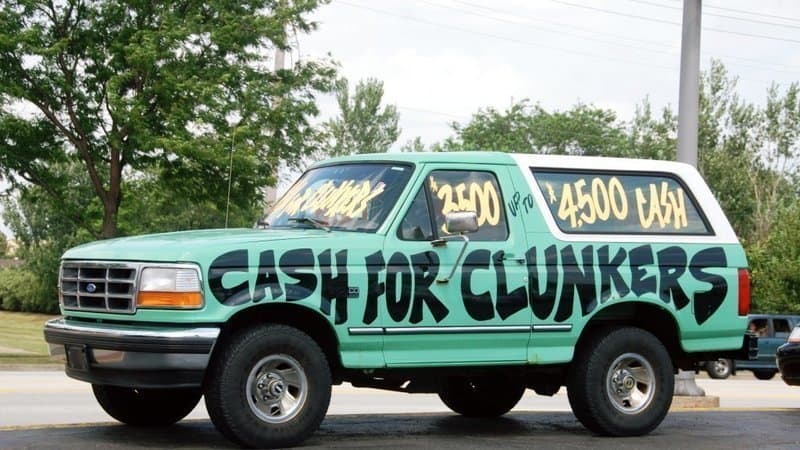 New Cash for Clunkers program ‘is not in the cards’

Washington D.C.—There was one notable omission in the recent fifth Coronavirus stimulus package passed last month by the U.S. House of Representatives — it didn’t include a Cash for Clunkers program and it appears there may not be one forthcoming.

“We are very pleased that the passed fifth stimulus legislation does not contain a Cash for Clunkers program,” ASA National’s Washington D.C. representative Bob Redding told Aftermarket Matters Weekly on Tuesday. “The Senate will likely take their version of this stimulus legislation in June. We are focused on the Senate now.”

It is unclear if the Senate legislation will include a Cash for Clunkers component, however. Ann Wilson, who is senior vice president, government affairs for MEMA, told Aftermarket Matters Weekly that they don’t anticipate to see anything resembling a similar program in a Senate bill.

“No one is expecting a scrappage program,” she said. “We’ve been quietly working with government officials to educate them that it’s counterproductive. From elected members of Congress to industry manufacturers, everyone agrees it’s a bad idea. We’re keeping our eye on it — but it’s not in the cards.”

ASA’s Redding said his association’s initiative to encourage members to send letters to Congress in opposition of Cash for Clunkers helped play a role in dissuading elected officials from including the program in the recent proposed legislation. “Absolutely they did. We had an overwhelming response from shops to Capitol Hill and we aren’t finished yet.”

The Cash for Clunkers program was initially established under the Car Allowance Rebate System (CARS) Act during the Obama Administration. The program paid the owners of older vehicles as much as $4,500 to help stimulate the economy and reduce emissions in the summer of 2009. During this short period of time, approximately 700,000 post-warranty vehicles were taken off U.S. highways and out of independent repair shops.

Wilson added that offering an incentive program for new-car sales would be bad timing as the pandemic ripples through supply chains and auto manufacturers, who could face challenges meeting increased demand. “We’re focused right now on keeping the supplier community liquid,” she said.

“The last time Cash for Clunkers came out, it decimated our parts supply and took cars out of the system that shouldn’t have been,” Kelley said. “It removed vehicles that were going to be moved off the roads, anyway — it simply gave cash for cars headed to scrap. The net effect was that the government spent a bunch of taxpayer money, and all it did was harm the aftermarket.

“If the government wants to incentivize new-car purchases, then they have to find a better way.”