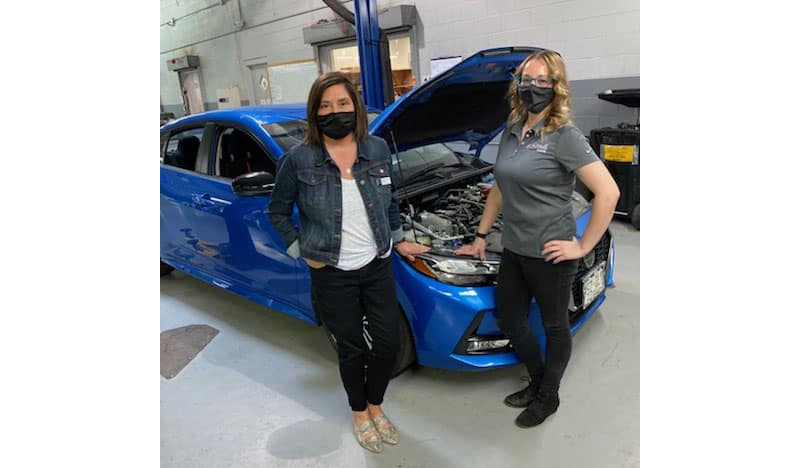 Larry H. Miller Dealerships' Jodie Cordova (left) mentors a young tech. "For all of the women out there who would love to do this work, know that you can and if you get your foot in the door, be confident enough to embrace the environment and in doing so, you can succeed," she says.

Shattering the ‘Glass Ceiling’ of Women in Dealership Parts and Service

After deciding college wasn’t for her, Colorado’s Jodie Cordova began charting a long and successful career in automotive that continues today

Throughout history, women have established their footprints, broken glass ceilings and today continue to serve as an example that gender doesn’t determine a person’s ability to make an impact or succeed. Women contribute to this history every day in every industry, and Jodie Cordova is driving a path least followed in the automotive industry, but one she hopes to have a hand in changing.

Cordova isn’t a woman concerned about statistics or conforming to traditional gender roles. What has fueled her career in the automotive industry for the past 37 years is her deep-rooted passion for cars.

Her love of cars was seeded early during her childhood as the youngest of four siblings, where this self-described “Daddy’s girl” recalls spending time with her father in the garage as he tinkered with his cars. She would watch and assist him in fixing those cars by handing him tools, and over time those tasks would build her knowledge and interest in cars that continued with her introduction to muscle cars in the early ’70s.

The simple act of father-daughter time became the catalyst and key to jumpstarting her career path, leading her to opportunities to serve in leadership roles at Larry H. Miller Dealerships as both a service manager and parts manager.

The rarity of this may not seem obvious to many. Yet, in 2020, the U.S. Bureau of Labor Statistics reported that less than 2 percent of auto service technicians and mechanics, or automotive body and related repairers are female. The number of women in management positions in those departments is likely even smaller. Considering that she began her career in 1984, her roles and positions in this male-dominated industry could be regarded as groundbreaking.

“I never saw myself as an outsider, or this as a place that I didn’t belong, nor did I play into the idea that this was a difficult environment for women,” Cordova told me. “While I realize that there are obstacles to be a woman in this environment when I started my career, I never focused on them. I just assumed the role and accepted the challenge.”

Cordova’s career journey could be described as “fate.” After spending two years at the University of Colorado Boulder, she realized that wasn’t the path she wanted to take and left Colorado at the age of 20 for Phoenix, Ariz. It was there where she took her car (knowing exactly what was wrong) into a dealership in Scottsdale and began a conversation with the owner as she waited.

She shared her story, how she was new to town and would soon return home to Colorado. Right there, he offered her a job as a service advisor. In 1985, that dealership purchased a store in Yuma, Ariz., where she was deployed to assist the service department. It was a small shop that had seven technicians, one service manager and her. Though small, it was busy, especially during the summer months when Arizona’s continuous 100-degree temperatures would wreak havoc on cars and cause them to break down.

It was there where she recognized her true passion, and it was also where she met her then-husband and had her two children. She eventually moved back to Colorado, where she continued her work as a service advisor and warranty administrator at Empire Nissan (for 10 years) and then at Tynans Nissan (for 17 years).

In 2016 she began working for Larry H. Miller Nissan Highlands Ranch, where she oversaw the service department and led a team of 27 employees, of which 50 percent were women. Today, she manages the parts operations at Larry H. Miller Nissan Arapahoe Dealership, including parts sales and inventory control to meet service, repairs, and sales demands, all while ensuring external and internal customers’ satisfaction.

Her longevity and success can be attributed to simply not making gender an issue, developing strong relationships and establishing mutual respect within her team.

“Men and women are Ying and Yang, whose strengths and weaknesses complement one another and sync together perfectly to create an environment for success,” Cordova said. “It’s about creating a baseline working relationship centered around transparent communication, mutual respect and team inclusion to build a healthy environment. We are going to respect each other, we aren’t going to worry about gender, and we will all earn our stripes appropriately.”

Larry H. Miller wanted his dealerships to be the best place in town to work and the best place in the city to do business. This idea is at the forefront of Cordova’s work, in which she hopes that customers see them as a unified team with one common goal — to take care of them. But to do so, she understands that she must take care of her team.

As a leader, she recognizes the importance of being of service to her team, the customer, and the future industry talent interested in taking her path. While the female numbers of representation are still low across the nation, she remains encouraged about women’s opportunities to fill the gaps.

“I’m proud to be a part of the 1.9 percent of women in this field. I feel like women have something great to offer this industry, not to say that men don’t. But given our natural ability to be emotional, compassionate and empathic — those characteristics lend themselves nicely to building good relationships and trust with the customer.”

Together, Cordova and Larry H. Miller Dealerships are doing their part to invest in the future and keep the doors of opportunities open for everyone with a passion and a desire. She serves as an example of what’s possible and is considered a mentor to many. Larry H. Miller Dealerships has dedicated resources and capital to ensure they have a presence and relationships with tech schools across the United States.

They are also working to ensure that individuals interested in going into a trade-related industry focused on the automotive sector receive the education they need through tuition support and apprenticeships. Throughout her journey, Cordova’s goal has been to be in positions to learn “all things automotive,” and along the way, influence and give other women opportunities.

“I’ve had an amazing career that has allowed me to see every facet of the dealership business, and this is home to me. For all of the women out there who would love to do this work, know that you can and if you get your foot in the door, be confident enough to embrace the environment and in doing so, you can succeed.”

People often say that you are the sum of your parts and that each one plays a role in supporting the other. She hopes the sum of her experience will continue to drive her forward to her next destination as a car dealership general manager. Her story continues.

Niambi Nicholes earned a Bachelor of Arts degree in Journalism specializing in public relations and broadcasting from Metropolitan State College of Denver; and a Master of Science degree in Organizational Leadership from Regis University. She is an account manager at the Gomez Howard Group.