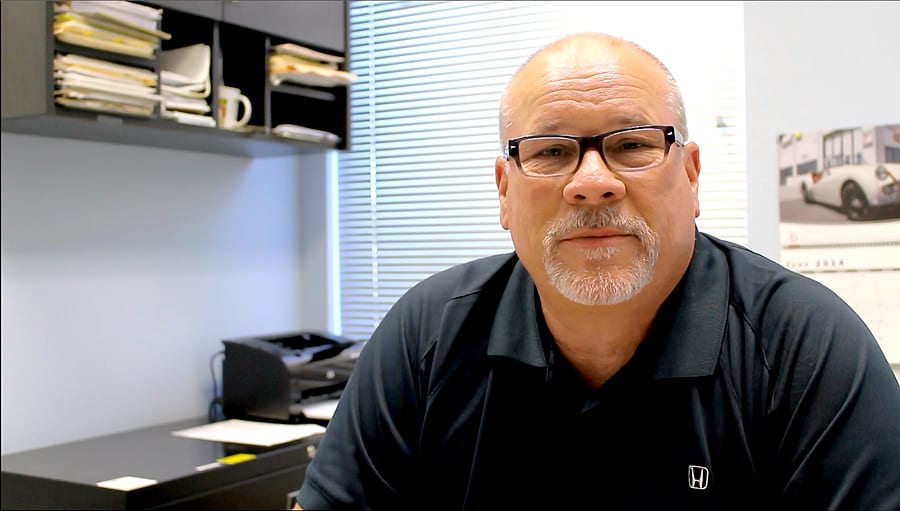 Elk Grove, Calif.—When Elk Grove Honda’s body shop director, Jeff Watson, was younger and in high school, he aspired to be a professional musician and rock star, though his mother had some advice — have a career to fall back on.

“I didn’t want to be that musician who lived in a van down by the river,” said Watson, who still plays in a band.

Watson soon found his path forward in an apprenticeship program after attending automotive and business administration classes at a community college. He eventually landed at Elk Grove Honda, where he’s been for 36 years, managing its Verifacts 5-star medallion shop.

Training and being a Verifacts collision center has helped develop and maintain Watson’s shop processes and standard operating procedures, such as documenting each vehicle’s damage in photos with the owner present.

“We point out any potential pre-existing damage, then verify with them later if there is or not,” Watson said. “Customers might not realize they had a previous dent or damage, so photos also help them understand the damage was pre-existing if there was any question during delivery. It helps to make everyone happy and no one goes home mad.”

Each vehicle undergoes a thorough disassembly process for estimates with additional focus on hidden damage. Factory printouts are obtained for welding requirements, replacement requirements and proper OE repair procedures, and then the technicians will also bring the information to the repair.

Watson said he is a proponent of cross-training his staff, some of whom are hired as detailers then assist his technicians when opportunity presents itself.

“It becomes a routine and happens organically, so you can see if there’s promise for future career development. If they show interest, I like to include them and have them work with the techs doing little things to see what niche they fall into.”

Of the dealership’s 170 total employees, the five longest serving staff are in the body shop. His longest-termed employee has been with him for 34 years and the shortest-termed person has been in the shop 16 years. Three of his six technicians began as detailers, washing cars and sweeping floors, from high school.

“We’re not the highest paid shop in town,” Watson said, “but we’re fair and they like it here.”

He offers his techs as much training as they can do, though he doesn’t adhere to a specific annual training requirement.

“It’s not regimented, but if I see a class that will benefit my staff or myself, then we’ll jump in and take it.”

Elk Grove’s paint jobber, Jim’s Color Corner, is a training resource that arranges classes through Axalta, which the shop has sprayed for 25 years.

“We have used other paint manufacturers with our jobber, who I’ve been with for 32 years, but the Axalta product is on another level and my painters like it a lot.” Additional training is sourced through I-CAR and American Honda.

Invest in the shop, not DRPs

Watson avoids DRPs, saying that when the programs first entered the industry the joke was that “DRP” stood for “Do Our Paperwork.”

“Some shops think the best way to get a lot of work is to get on board with a DRP. But if they spent the same amount of time, effort and money they did to acquire a DRP — as well as making sure they gave them the proper discounts — and instead invested in shop marketing and building their customer base, then they’d realize they didn’t need DRPs. If a shop performs good, quality work, hires quality people, seeks training and invests in equipment, then they won’t need DRPs.”

The ownership and general management of Elk Grove are supportive and willing to understand the collision repair industry and what it takes to succeed in it, Watson said. “We’re able to get the latest equipment to stay current with what is necessary.”

Watson did allow, however, that DRPs might be worth considering for some shops during an economic downturn when business slows and work is more difficult to come by. He added that the recent economic recession was a boon for MSOs, such as Caliber Collision, which acquired multiple locations after the dust had settled.

“That’s how they were able to get as big as they are — and I have no problem with their business plan — by offering to buy shops that were able to survive the recession and who took the opportunity to get out of the business.”

While the vast majority of Elk Grove’s work comes from insurance companies, Watson is quick to add that, unlike some shops, his collision center’s allegiance is to their customers, not insurers.

“We’re not worried so much about following and satisfying insurance company matrixes as we are about making sure our customer’s car is fixed properly.

“We look out for them first and foremost.”