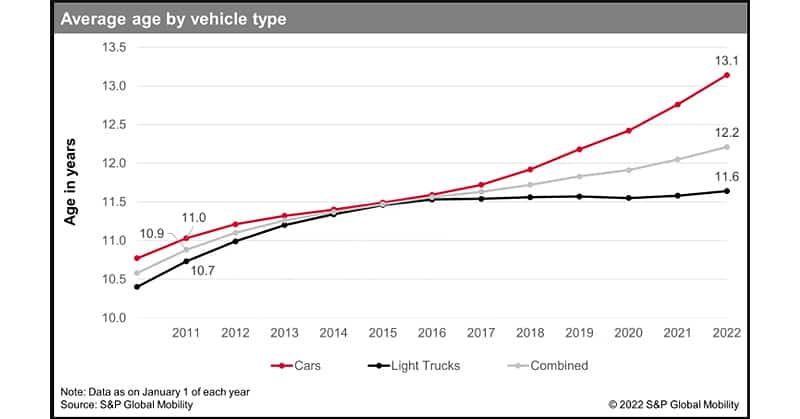 Potential for a ‘notable increase’ in repair revenue as average vehicle age increases to 12.2 years

The average age of light vehicles in operation (VIO) in the US rose to 12.2 years this year, increasing by nearly two months over the prior year, according to new research from S&P Global Mobility (formerly the automotive team at IHS Markit).

This is the fifth straight year the average vehicle age in the US has risen. This year’s average age marks another all-time high for the average age even as the vehicle fleet recovered, growing by 3.5 million units in the past year.

The global microchip shortage, combined with associated supply chain and inventory challenges, are the primary factors pushing US average vehicle age higher, according to the analysis. Chip supply constraints have caused continued parts shortages for carmakers, who have been forced to cut production. The constrained supply of new cars and light trucks, amid a strong demand for personal transportation, could have influenced consumers to continue operating their existing vehicles longer, as inventory levels for both new and used vehicles were depleted across the industry.

The ongoing effect of supply chain constraints has led to a decrease in vehicle scrappage, which measures the number of vehicles leaving the vehicle population and has been a catalyst for the rise in average age over time. The scrappage volume for the prior year stood at more than 11 million and scrappage rate as a percent of vehicles on the road was just 4.2% of the vehicles in operation (VIO) — the lowest annual rate in the past two decades. It was in stark contrast from the previous year, which saw scrappage at its highest volume in two decades at more than 15 million units, and second highest scrappage rate at 5.6% of VIO.

Additionally, the pandemic drove consumers from public transport and shared mobility to personal mobility and since vehicle owners couldn’t upgrade their existing vehicles due to bottlenecks in the supply of new vehicles, the demand for used cars accelerated — boosting vehicle average age further.

Interestingly, the vehicle fleet grew substantially in spite of soft new vehicle sales as units that left the fleet during the pandemic returned and the existing fleet sustained better than expected.

Ultimately, more vehicles that were taken out of circulation during the pandemic are returning to the fleet and increased residual values mean growing business potential for the aftermarket segment.

Vehicle miles traveled also has returned to pre-pandemic levels, increasing by more than 10% in 2021 as lockdowns eased and people returned to work and leisure travel. According to the S&P Global Mobility analysis, light vehicles in the US traveled an average of more than 12,300 miles in 2021 and are expected to achieve a similar result in 2022.

The average age of light vehicles in operation (VIO) in the US will continue to have upward pressure through 2022 and 2023, as the pipeline for new vehicle production and sales continues to be weighed down by parts shortages. The increasing use of sophisticated technology in vehicles will also maintain pressure on semiconductor supply. The ongoing Russia-Ukraine crisis remains a potential impact to the new vehicle supply chain in the coming year.

The lack of adequate supply of new vehicles to meet the increasing demand will continue to set the upper limit for scrappage rates, which will continue to provide upward pressure on average age.

“While some of the new vehicle demand has been destroyed, as supply chain challenges ease, some pent-up demand for new vehicles is expected to be realized through the middle of the decade. At that time, scrappage rates could increase, creating the climate for average age to moderate or even reduce slightly,” said Campau.

BEV Growth as part of VIO

Demand for battery electric vehicles (BEVs) in the US has been expanding rapidly over the past few years, with new registrations growing even through the pandemic. This has boosted total BEVs in operation to 1.44 million units (0.51% of overall VIO), up nearly 40% from the prior year, according to S&P Global Mobility analysis. The average age of electric vehicles in the US is 3.8 years of age this year, down from 3.9 last year, and has been hovering between 3 and 4.1 years since 2016.

Interestingly, the growth in BEV registrations is driven by light trucks (including SUVs), as is also true for the overall automotive sector. Light trucks now represent more than 50% of new BEV registrations, growing 141% over 2021. Electric car registrations grew 50% in the same period. The rising preference for light electric trucks is not directly translating into a significant jump in overall BEV ownership, but to date is replacing demand for battery electric sedan body styles, and as more BEV models that better match lifestyle choices are available, the market is poised to see more sustained organic growth in BEVs overall

“Behavior in the BEV market similar to the overall market — customers like truck and utility body styles; and manufacturers have reacted to position their portfolios to meet that preference,” said Campau. “It’s not the only similarity with the overall market. BEV miles traveled in recent years also have trended toward the norm, with BEV’s averaging about 12 thousand miles annually, which is only a couple hundred miles lower than the total population’s average.”

As the volume of BEVs increases, it will mean their average age will begin to increase, resulting in increased repair opportunities for BEVs over time.