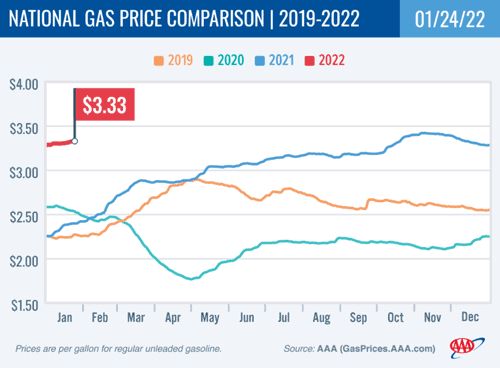 Washington, D.C.—Despite typical low seasonal demand for gasoline, pump prices are clawing their way higher. The national average for a gallon of gas is $3.33, two cents more than a week ago. The culprit is the rising price for oil, which is now bobbing around $85 per barrel, nearly $20 more than in November. Last week, both OPEC and U.S. energy officials said the COVID-19 omicron variant is no longer expected to slow the continued recovery of petroleum demand in 2022. Despite this, OPEC and its allies maintain their planned modest production increases and will not dramatically ramp up output. The result will be a continued tight supply of oil.

“Since dipping to $3.28 in the first week of January, the national average for a gallon of gas has slowly started to rise again,” said Andrew Gross, AAA spokesperson. “And as long as the price for oil remains elevated, consumers will be feeling it at the pump.”

According to new data from the Energy Information Administration (EIA), total domestic gasoline stocks rose by 5.9 million bbl to 246.6 million bbl last week. Meanwhile, gasoline demand rose slightly from 7.91 million b/d to 8.22 million b/d. The slight increase still puts gas demand in the average range for the winter driving season. Typically, pump prices drop due to low gas demand and a rise in supply, but a steady increase in the price of crude oil has prevented this from happening. As oil prices continue to climb, pump prices will likely follow suit.

At the close of Friday’s formal trading session, WTI decreased by 41 cents to settle at $85.14. Although crude prices ended the day down due to weather-related demand concerns, prices generally rose last week despite EIA reporting that total domestic oil stocks increased by 500,000 bbl to 413.8 million bbl. The current crude stock level is approximately 15 percent lower than in mid-January 2021, contributing to pressure on domestic crude prices. For this week, crude prices could continue to climb if EIA’s following weekly report shows a decrease in total inventory.