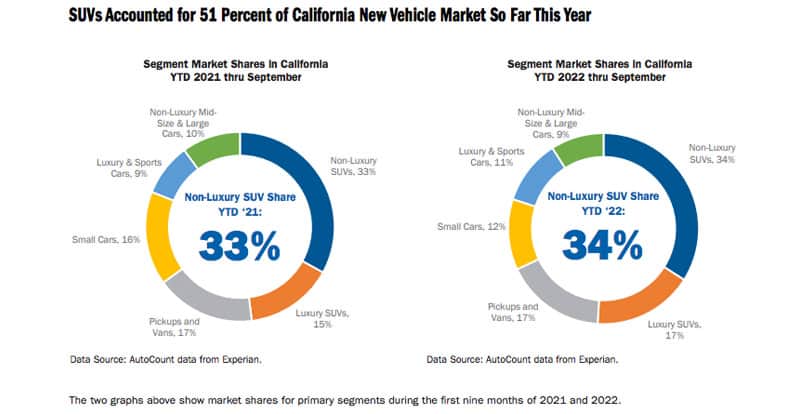 Toyota remains a mainstay in California, continuing to capture the largest segment of new car sales market share at 17.4 percent, followed by Tesla, then Ford

Sacramento, Calif.—Franchised new car dealers in California are trying to catch up with high demand despite a decline in new car sales in the third quarter of 2022.

The weakened economy, supply chain issues, labor availability, and chip shortages all lead to predictions that new vehicle registrations in 2022 will only hit 1.68 million by the end of the year (lower than anticipated last quarter).

Year-to-date, new vehicle sales in the United States dropped 13 percent as compared with 2021. Comparatively, California’s decline in sales slipped 16.1 percent when compared to the first nine months of 2021. While Q3 posted a statewide double-digit light vehicle registration decline for the fourth quarter in a row, that streak is expected to end as we reach the end of 2022 and anticipate an increase in these registrations.

“Our dealers are anxiously awaiting an inventory influx of both internal combustion engine and electric vehicles from our manufacturers. We have long-standing relationships with our loyal customers and we’re ready and willing to help get them the vehicles they desire today. We simply need our manufacturers to make and send us more cars,” said Oh.

Toyota remains a mainstay in California, continuing to capture the largest segment of new car sales market share at 17.4 percent, followed by Tesla, then Ford rounding out the top three brands in California. Both Tesla and Genesis increased new vehicle registrations for Q3, while all other brands saw declines. Hybrids excluding plug-in registrations also rose year-to-date up to 11.2 percent; however, plug-in hybrid registrations declined slightly from last year, only reaching 2.9 percent of registrations so far this year.

Midsize vehicles are performing much better than the overall market only down 13.2 percent while the industry average sits at 21.6 percent lower than last year. Two-row SUVs have been gaining market share in their segment, up 3.3 percent from 2019. Light trucks accounted for 68.3 percent of the California new vehicle market compared to 78.9 percent in the nation.

Both Northern and Southern California performed similarly in terms of the percentage of change year to date, with percentage declines of 16.2 and 16.8, respectively. As with last quarter, the San Francisco Bay market was least affected by the decline in sales, but only marginally showing a percentage drop of 13.3 while LA and Orange counties declined by 17.9 percent and San Diego dropped by 14.5 percent.