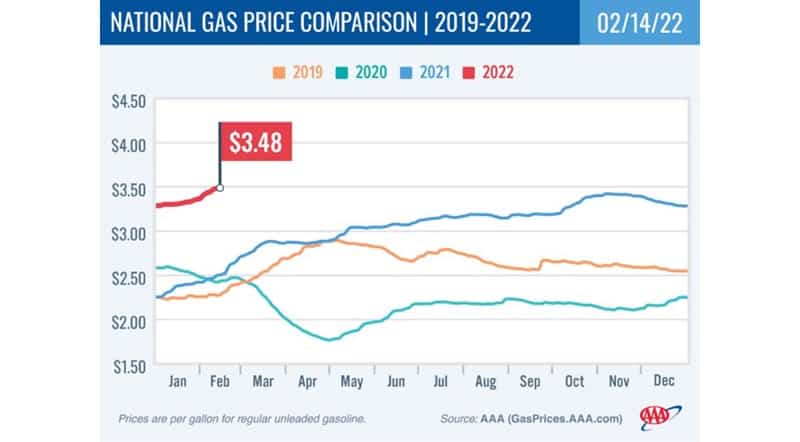 Washington, D.C.—The national average price for a gallon of gas rose sharply last week to $3.48, four cents more than a week ago. The main culprit behind the recent climb in pump prices remains the high cost of crude oil. Moderating winter weather and optimism over a potential fading of the omicron variant have led to an increase in gas demand.

“More drivers fueling up here coupled with a persistent tight supply of oil worldwide provides the recipe for higher prices at the pump,” said Andrew Gross, AAA spokesperson. “And unfortunately for consumers, it does not appear that this trend will change anytime soon.”

According to new data from the Energy Information Administration (EIA), total domestic gasoline stocks dropped by 1.6 million bbl to 248.4 million bbl last week. On the other hand, gasoline demand rose from 8.23 million b/d to 9.13 million b/d. A decrease in total stocks and increased demand have contributed to upward pressure on pump prices, but rising crude prices continue to play the dominant role in pushing pump prices higher. Gas prices will likely increase as demand grows and crude oil prices remain above $90 per barrel.

At the close of Friday’s formal trading session, WTI increased by $3.22 to settle at $93.10. The tension between Russia and Ukraine continues to contribute to rising oil prices. Russia is a member of OPEC+, and any sanctions based on their actions toward Ukraine may cause it to withhold crude oil from the global market.

Additionally, EIA reported that total domestic crude stocks decreased by 4.7 million bbl to 410.4 million bbl. The current stock level is approximately 13-percent lower than at the beginning of February 2021, contributing to pressure on domestic crude prices. If tension between Russia and Ukraine continues this week or EIA’s next report shows another inventory decline, crude prices could continue to rise.