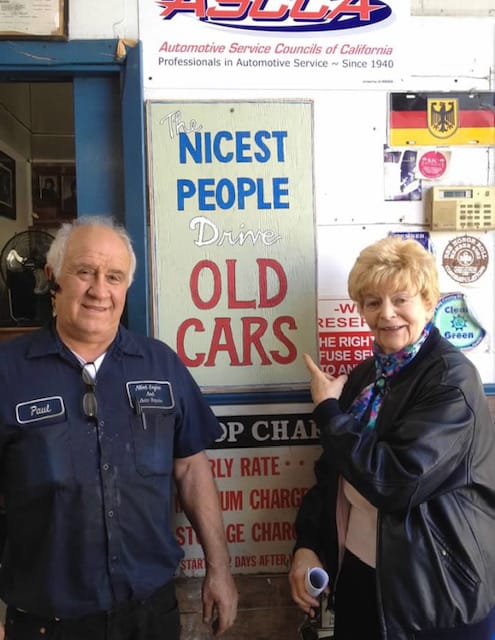 I came up with a sign that said, “The nicest people drive old cars,” which brought smiles to many customer faces, who were happy that their baby was getting fixed in my shop.

‘You sometimes you just never know what will bring new business into your shop,’ says Paul Grech

I was always thinking about ways to attract new customers early on in my shop ownership.

I’ve owned a 1957 Ford Thunderbird for decades and, at the time years ago, I put it on shop display. It instantly lit people up with nostalgia and gave them confidence in what I could do for them, and led to big tickets for their own classic car work.

Those customers led to more work. I recall one time I was eating lunch in my car parked in front of the shop with the window rolled down. I heard people talking to each other as they walked by. They would say, “He must do good work, look at the type of cars people trust him with.”

Not everyone was so easily convinced, however.

Around the same time, a first-time customer came in with a 1989 car and, as I listened to her concerns, I realized it was something I hadn’t experienced before on that model. I instinctively took out a service and repair manual.

That’s when I heard her say to her companion, “Look, he doesn’t know what’s wrong, he has to refer to a book.”

After hearing that, I soon after made a sign that said, “Don’t be alarmed if I look into a repair guide prior to working on your vehicle — but, rather, be alarmed if I don’t.”

It made future customers smile and helped to win over their confidence, too. I got another inspiration for a sign right after a big political demonstration that marched past my shop’s front door. At the time, I had a regular painter who painted my building and I enlisted him to help.

This one read, “Thank you World War II vets for your supreme efforts which have enabled my generation to have such a good life.”

I later added Korean, Vietnam and Golf War vets. Upon reading that, customers and people were always quick and happy to mention some relative or someone they knew who was in a war — it brought back memories.

When I remodeled the office in 1985, I had the old office door nailed to the wall just opposite the entrance. I told the sign painter to paint, “Between February 15, 1973, and December 15, 1985, 18,000 customers went through this little door. I went to small claims court twice and won both times.”

My customers who owned businesses of their own just loved it.

By 2005, my business was mainly older cars. The people who drove them loved them and anyone who could work on them. I came up with a sign that said, “The nicest people drive old cars,” which, again, brought smiles to many customer faces, who were happy that their baby was getting fixed in my shop.

Later on, my painter painted, “Open on Saturdays when the wife lets me. We love old cars and even my mother in law likes me.”

That last one got me lots of woman customers. Those signs just made customers feel good about being in Allied Engine, and you sometimes you just never know what will bring new business in.