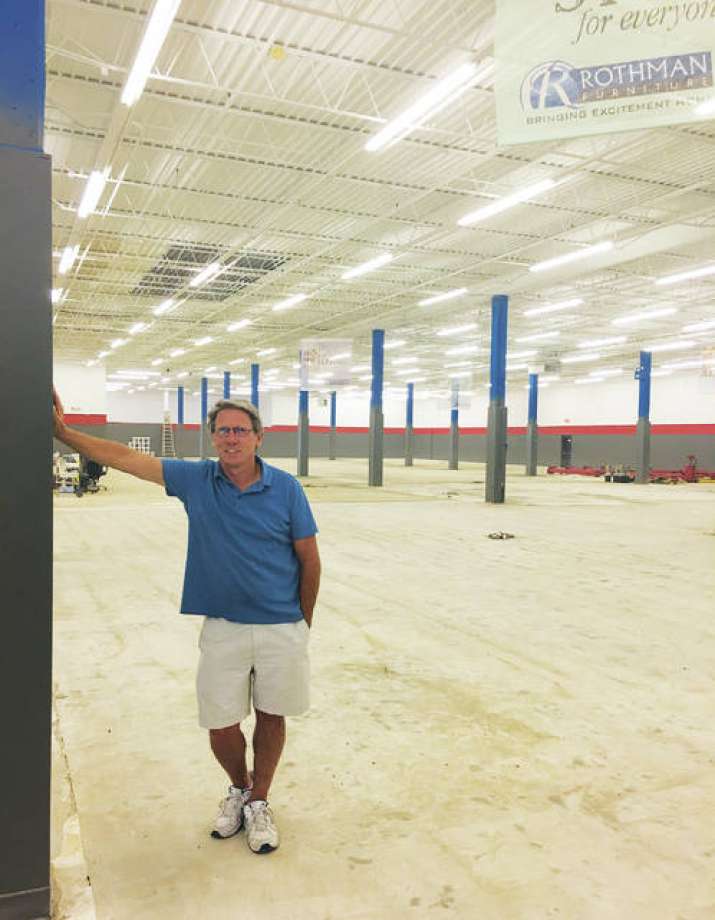 Mark Anderson stands in a former 35,000-square-foot furniture store that he would transform into his new repair facility. (Photo courtesy of The Telegraph)

Up from the ashes

Illinois business bounces back after fire destroys shop with a new 35,000-square-foot facility for mechanical and collision repair

Alton, Ill.—A new day has dawned for Mark Anderson. After facing a number of headwinds — including a fire that burned down one of his two shops and hurdles to clear from his insurance company — his businesses are back on their feet.

“We’ve had our share of ups and downs,” Anderson told Aftermarket Matters Weekly. “The last five years have been challenging — our insurance company also took almost four years to settle the fire claim. It took the wind out of our sails and nearly bankrupted us — there were many sleepless nights.”

Just as he was going to use insurance money to build a new facility for both shops under one roof, his lease had run out and the owners decided to rent his space to another business. Anderson said they had little time to act.

“Fortunately, a former furniture store became available at the time in 2018 and we were able to secure a short-term lease while we got financing underway and begin construction. Once the purchase was completed, we invested $1 million in renovations. In the end, losing our original lease was a Godsend.”

Andy’s Tire and Auto had been operating at Alton Square Mall and Andy’s Auto Body at 3444 E. Broadway in Alton. The relocation ­— just off of Homer Adams Parkway, at 3001 Washington Ave. — was also a boon for drive-by traffic.

“It was a great move for us,” Anderson said, “both of our former locations were not at the busiest of intersections or roads.”

“Our visibility has changed dramatically. Homer Adams Parkway is the major road through Alton and we’re at one of the busiest intersections now.”

Initially, business dropped in 2018 as Andy’s Tire and Auto moved in and made necessary renovations. Revenue in 2019 eventually reached pre-relocation numbers. Anderson said the tire and auto center business had forecasted a 20 percent increase for 2020, but the coronavirus has set expectations back to be similar to last year’s numbers.

“The body shop,” he added, “has been unbelievably busy the last 12 months and we’re 10 percent higher than 2019. The shop was up and running in the new facility much sooner. We were also able to avoid placing any of our 25 employees on furlough during the pandemic.

“We have all the major DRPs, and the new facility is attractive to insurance companies that seek professionalism, good processes and factory certifications.”

The new location has been equipped with a new Garmat paint booth, where staff sprays Spies Hecker, sourced from Advantage Paint and Body Supplies in O’Fallon, Mo.

“I like to support independent businesses such as myself,” Anderson said. “Advantage also works with us on training and different techniques to improve productivity. They’re very conscientious in helping us become better and more productive.”

He is presently installing another double Garmat booth to increase productivity “significantly.”

“We’re a state-of-the-art facility. We also feature aluminum welding and repair stations, factory compression spot welders and furnaces to burn used oil from oil changes to heat the facility in winter. We try to recycle everything we can.”

In addition, Anderson has replaced 880 light fixtures with LED lighting, which, after four years, will save the shop up to $16,000 annually.

“We’ve also enhanced the work environment by installing a 16-foot and 20-foot ceiling fans so everyone remains comfortable with constant air flow.

“We’ve done so much to make this a premier facility.”

Andy’s Tire and Auto is also an emissions-testing facility for the state of Illinois. “We average 24,000 vehicles a year for testing and it gives us an opportunity to let vehicle owners know we’re here and what we do. Once the testing is complete, we can refer them to our service desk, whether it’s mechanical- or collision-related.”

He added that approximately 20 percent of the state’s cars fail the test at his facility, of which 10 percent elect to have repairs performed at Andy’s. “It’s a great opportunity to make a repair and have a sale. And we also sell the license plates stickers for the state, which can take five minutes for the customers compared to three hours at the DMV.”

The shop recently sold 1,500 stickers in one month alone, which Anderson said can generate money in its high volume while also helping to “take a load off for the department of revenue.”

Community involvement is a large component of Andy’s DNA. Anderson is involved with the Rotary Club and Knights of Columbus, and the shop has generated $100,000 over the past 10 years through a golf tournament for a no-kill animal shelter. Anderson also volunteers for the Salvation Army, among many other institutions and outreach efforts.

“Whenever anyone needs something, they know they can call us and we can help them out,” Anderson said. “I’m out in the community every day doing something — and in the 17 years I’ve been doing this, no one has ever complained to me about the quality of our repairs.

“What we’re doing, everyone should be doing, because we do it well and the results speak for themselves.”

Andy’s regularly conducts numerous surveys, which always results in positive feedback, he said. “We have new customers come in every day — especially in the tire center, where we get about 50 new ones every month.”

Anderson has two Yorkies who have come to work with him for the past 11 years, and he said customers love them. “They’re our shop mascots and people bring them gifts and treats all the time. They’re also good therapy for body shop customers who might have been in a traumatic accident. You can almost see the stress release.”

Having both shops together has really helped because they feed off each other, Anderson added. “The fire had really put the ‘hurt’ on us, but now we’re growing. I’m 60 years old and I have a beautiful facility and business, so I’m just going to enjoy life a little bit now.”