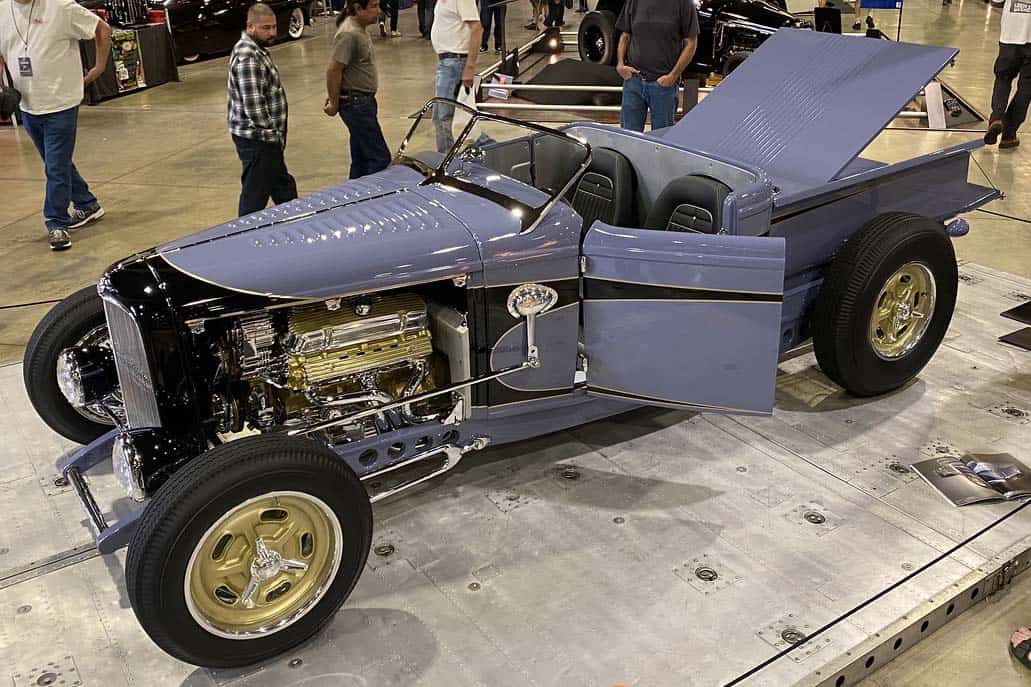 The car’s owner, Monty Belsham of Houston, BC, turned to Squeeg’s Kustoms in Chandler, Ariz., for the work. Painters Doug Jerger and Moose Graczyk at Squeeg’s used an array of PPG paints to give the roadster its black finish with fire-hot flames.

Paint included DELTRON DBC Basecoat Black and DCU2021 CONCEPT Urethane Clearcoat, along with a rainbow of tangerine, apple red and magenta RADIANCE dyes and pearls to emphasize the flames.

The all-metal, limited-production Kugel Muroc was sold in the early 2000s as a package comprising bare body plus chassis. It was up to the buyer to finish the rest of the car. This was Squeeg’s second AMBR win. His first came in 2011 for a 1934 Ford roadster. Other show winners also featured PPG finishes.

The Refinery, a custom paint shop in Manteno, Ill., owned by Adam Krause, took the Al Slonaker Memorial Award for a 1936 Willys pickup owned by Ron and Vicky Ernsberger of Holiday City, Ohio. After the preparation and bodywork was done by Krause and his brother, Tyler, Adam sprayed PPG’s ENVIROBASE High Performance basecoat with ECS65 and ECS67 A-Chromatic Sealers and GLOBAL REFINISH SYSTEM 8152 clearcoat on the body and Global Refinish System D8115 Matte Clearcoat on the inside of the truck bed and bottom side of all the panels to give the truck a classic Ferrari Rosso Mugello (red) finish. The award is given to the best non-roadster on display and honors GNRS founders Al and Mary Slonaker.

Dean Livermore of Hot Rods by Dean in Phoenix, Ariz., earned the Best Paint award in the Al Slonaker Class for his bold finish on a rare 1965 Acadian Canso Sport Deluxe owned by Richard and Penny Hammer of Viking, Alberta. The Acadian got its custom color, “Black Brandywine,” courtesy of Livermore’s mixing. He relied on Envirobase High Performance basecoat and finished the look with Deltron DCU2021 Concept Urethane Clearcoat.