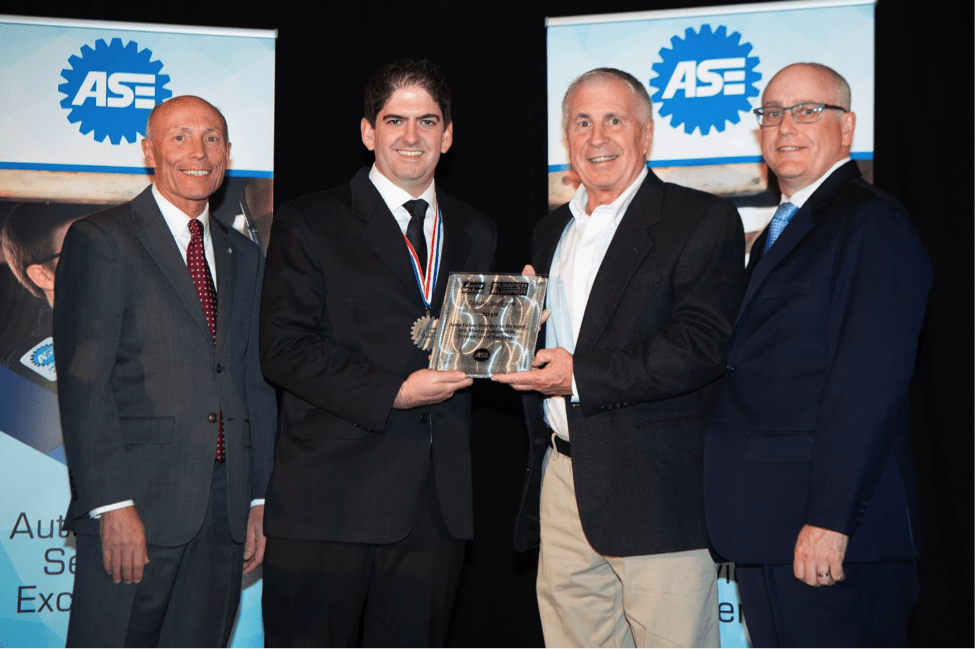 Scottsdale, Ariz—Auto Value and Bumper to Bumper’s own Jason Jackson was honored along with 52 other top technicians from around the country at the ASE Technician Awards Reception in Scottsdale, Ariz. Nov. 13.

Jackson, the Auto Value and Bumper to Bumper 2019 United States Technician of the Year, of Seal Beach, Calif., was flown out to Arizona with his wife, Claudia, and his parts supplier, Pat Winters, vice president of sales and marketing at Warren Distributing, Inc., for two days of fun and recognition.

“It was an honor to stand on stage and award the 2019 ASE Technician Award to Auto Value and Bumper to Bumper Technician of the Year Jason Jackson of Seal Beach, California,” Winters said. “There were 53 winners who got awards on the stage, all with the same goal of being the best they could be and furthering our industry through talent and hard work. The many backstories on how they got to this point were heartwarming and very impressive. Congratulations to the techs and thank you to ASE for their hard work in helping the industry recognize the best of the best.”

Jackson, his wife, and Winters were welcomed to Scottsdale, Ariz., with an opening reception Tuesday and closed out the trip with the awards banquet Wednesday evening.

While all 53 winners were ASE-certified, Jackson distinguished himself further as an ASE master technician with A1-A8 and L1 certifications. He is also nationally recognized as a Kia master certified technician who came in second in the Kia World Skills Cup in 2018. He earned his AAS degree in automotive technology from Salt Lake Community College, and he continues to further his education with various aftermarket training classes.

He has been working as a technician for five years. Earlier this year, Jackson earned the highest score on a custom ASE test at Auto Value and Bumper to Bumper’s Technician of the Year finalist trip in Detroit, Mich., which was sponsored by DRiV. As a result, he won the program group’s Technician of the Year designation and was honored at a banquet during the trip.

Published in Mechanical Repair, On the Move, Regions and Southern California