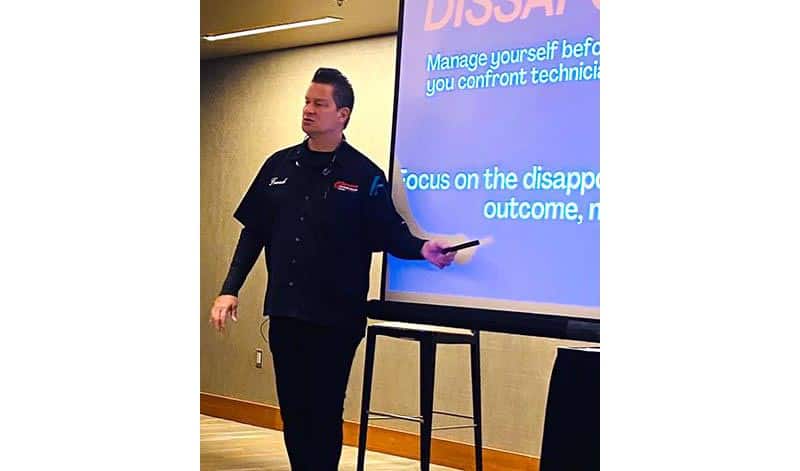 Denver—In this coaching program, Frank Leutz will be diving into some of the most difficult challenges for service advisors and shop owners with a progressive approach to real-world scenarios and solutions for success.

Training: Removing the Wall Between Advisors & Technicians – Higher Levels of Team Performance (this training is for Techs, Advisor and Manager)

In ASA Colorado’s event announcement, it stated, “Your service bays are jam-packed and you have met every commitment to a healthy ticket and a happy client, however, your technician seems to be on a different flight path of productivity and may jeopardize the process of completing service both on time and correctly.

“This session will reveal how to truly uncover what is lurking behind some of the most common communication issues at hand between you and your technician\s while overcoming below-average technician performance.”

After learning the ropes as a mechanic, Frank Leutz ventured out starting his first automotive shop in 1996 with $4,000, a used hoist, floor jack and lots of naive determination. Six years later, he profited through the sale of that business, and in 2004 opened Desert Car Care of Chandler in Chandler, Arizona.

Desert Car Care expanded to a second location in 2009 and a third in 2012. Both were sold profitably in 2013 to focus on the Chandler operation which grew to become a nationally recognized award-winning 10 bay operation grossing close to 3 million a year in service sales alone . Frank took his leadership abilities to serve as President of the Phoenix Chapter of the Automotive Service Association from 2013-2017. In 2016 he was elected, and continues to serve, on the National ASA Mechanical Operations Committee representing independent garage owners across the country.

In addition, Frank has created the award-winning weekly radio\podcast show Wrench Nation while premiering the unique and fascinating automotive talents and lifestyles of the industry, with guests such as Craig Jackson, Drew Alcazar , Cody Walker and Princess Vidita Singh of Barwani India to name a few. Working with major media TV networks and automotive brands across the globe filming a multitude of projects and coaching| consulting the automotive aftermarket through progressive training sessions with an approach like no other while providing key critical takeaways and engagement leading to action for a variety of industry associations and conferences across the country.