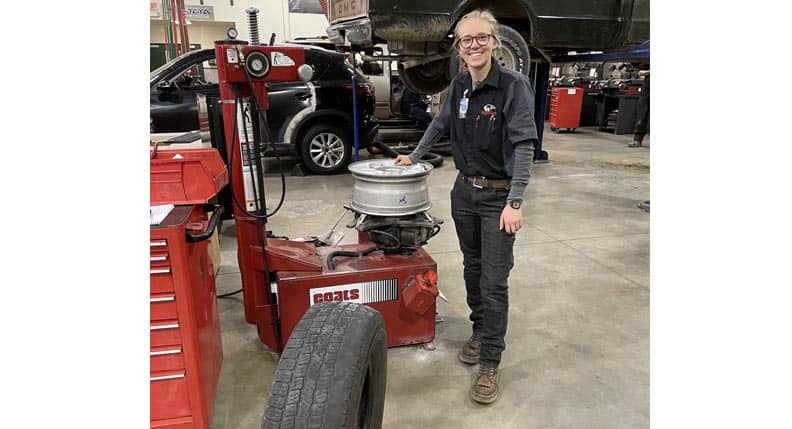 After choosing to forego the traditional college experience, Kate Martin chose to blaze her own unique trail as a woman in automotive

Laramie, Wyo.—After choosing to forego the traditional college experience to attend WyoTech, Kate Martin was awarded a scholarship from The Jessi Combs Foundation in recognition of her passion and dedication to blaze her own unique trail as a woman in the trade of her choice.

Founded in 2019, the mission of The Jessi Combs Foundation is to educate, inspire, and empower the next generation of trailblazing and stereotype-breaking women.

The foundation’s mission aligns perfectly with the objective of Women’s History Month. The latter commemorates and encourages the study, observance, and celebration of the critical role women play in American history. The Jessi Combs Foundation was formed in honor of the late Jessi Combs, a renowned racecar driver and female powerhouse in the trades who also happened to be a graduate of WyoTech.

As an acclaimed racecar driver and leader in the trades, Jessi Combs was a history maker herself. Now, Kate Martin has the opportunity to write her own chapter in the history books, courtesy of The Jessi Combs Foundation and WyoTech.

“We independently review every video application we receive. There are always a handful that stand out from the rest, and Kate Martin was one of them. Her passion and dedication to blazing her own unique trail as a woman in the trades was apparent,” said Dana Wilke, co-founder and board member, The Jessi Combs Foundation.

“It is pioneers like Jessi, and now, the future generation of women like Kate and our family of JCF scholarship recipients, that show women they can excel in whatever career path they choose. These women are our heroes. We hope that by shining a spotlight on their hard work, grit and determination in the trades it will show others what’s possible. The sky’s the limit. The scholarship program is funded entirely by donations from individuals and organizations who believe in Jessi and everything she stood for.”

After Martin bought her first truck in 2017, a 1976 Ford F100 she nicknamed “Rumble Bee” due to its yellow exterior, she began working on it with her father to better understand how the vehicle worked. This evolved into a personal passion for Martin, who graduated from high school in 2019. After initially enrolling at Walla Walla University in Walla Walla, Wash., for the 2019 to 2020 school year, she decided to rethink her focus and return to her passion for trucks after the COVID-19 pandemic shut down in-person classes.

Martin left Walla Walla University and quickly got to work repairing and enhancing trucks. She purchased five trucks in varying conditions and used them to source parts to complete repairs for her personal collection.

“I have motivation to learn, but it’s not the same as having a structured course laid out for you,” said Martin.

“Working on my trucks, I wasn’t achieving what I thought I should be at the rate I expected. In need of a little more structure and becoming frustrated at the pace I could teach myself, my sister and her husband suggested that I should go back to school. They encouraged me to look into some tech schools and find out what it would take to go to them and what they offered. So I did, and now I am attending WyoTech.”

Martin initially heard about WyoTech through her cousin, who is enrolled in the diesel technician program. After conducting her own research into the automotive trade school, Martin realized that she had found one of the only Automotive, Diesel, and Collision and Refinishing tech schools that still was offering in-person classes with hands-on shop work. The school also did not require masks or impose other restrictions, which Martin found to be important.

Despite her passion for trucks, industry data suggests Martin is, in many ways, an anomaly. Data from the U.S. Department of Labor shows that there are few women entering the skilled labor workforce, with just 11.6 percent of people who completed apprenticeship programs in the 2020 fiscal year being female — that is 4,204 women compared to 32,191 men. Three years earlier in 2018, only 7.3 percent of the people who completed apprenticeships were women, according to a study by the Center for American Progress.

By offering support in various forms ― for example, The Jessi Combs Foundation ― WyoTech actively encourages women to enter and succeed in the trades. Martin acknowledged the vital role that trade schools can play in helping women see themselves thriving in a trade career.

“I think that trade schools need to help educate women on the importance of a career in the trades. By no means does having a trade job mean you are less feminine or womanly,” said Martin.

“There is a massive need for more people in the trades, regardless of gender. Just be strong in who you are, prove others’ opinions wrong, use your passion to influence others, and pique curiosity through your excitement in what you do so that people are forced to ask you why you love what you do.”

Martin is scheduled to graduate from WyoTech in June 2022. Post-graduation, she plans on gaining experience in a restoration shop while simultaneously working on a couple of project trucks. She hopes to build her own classic truck restoration and modification shop specializing in building out Ford trucks from the 1960s to 1970s, with the potential to expand to classic Chevy and Dodge pickups. Martin’s goal is to restore the nostalgia of hard work and good times by putting these classic trucks back on the road for different generations of car enthusiasts to enjoy.