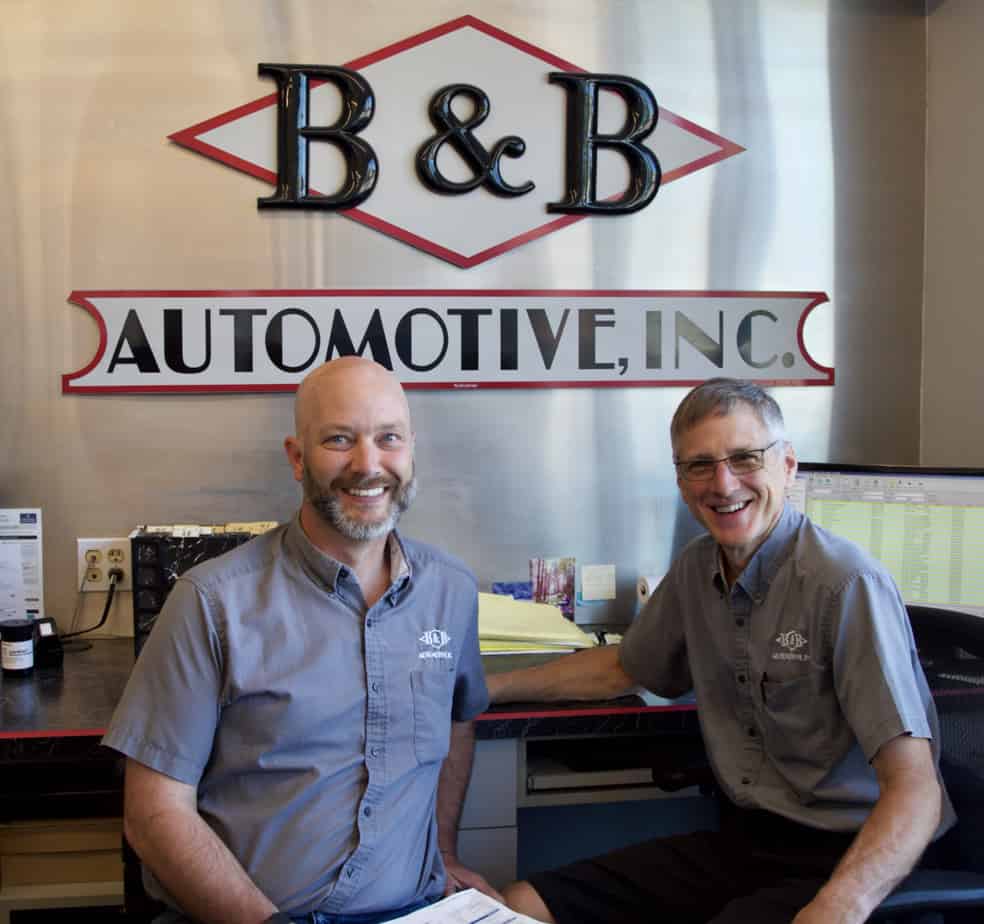 Bruce Jobst (right), founded his shop in 1983 and sold to Jeff Miller five years ago. Throughout those five years, Jobst has been working with Miller in the transition.

Butch Jobst will formally retire at the end of July and pass his shop to Jeff Miller, who has worked for him for 30 years

Aberdeen, Wash.—As some shops grow their own techs, Butch Jobst grew his own successor for B&B Automotive in Aberdeen, Wash. Jobst, who will formally retire at the end of July, will officially hand the reins over to his longtime employee, Jeff Miller, 50.

“I would say that Butch raised me from a pup in the industry,” Miller told Aftermarket Matters Weekly. “Based on the fact that I came here when I was 20 and didn’t have a lot of supervision before that, he taught me a lot of life skills, not just business skills. We’ve been tight and have done things outside of business — Butch has helped me tremendously in my personal life, as well.”

“The transition to ownership was essentially a non-event — it was just paperwork.”

Jobst, 59, founded his shop in 1983 and sold to Miller five years ago. Throughout those five years, Jobst has been working with Miller through the transition.

“For at least 10 years before we had a deal, it was always my intention to buy B&B and we spent a number of years discussing how it would happen,” Miller said. “I already knew the ropes and was functioning as manager and running the shop. Eventually, along the way, I also transitioned to handling the financial end of the business.

“The transition to ownership was essentially a non-event — it was just paperwork. I have no plans to change the fundamentals and principles of the business, which have made it uber successful and respected in the industry — it’s who we are.”

The shop moved to its current location in 1987 where it had grown to 12 employees for the past 20 years. “I struggled for a long time until I hired certain people and coaching,” Jobst said. “Joining ASA Northwest really helped me learn more about running a business — it was a big turning point for the shop in 1993.”

He added that he’s had a lot of highlights because of his profession and his business, including traveling throughout the country for NASCAR events and racing. “I’ve driven a lot of performance cars at different racetracks and venues such as Pikes Peak International Hill Climb. My wife, Shari, and I also rallied at SCCA ProRally and we met the Nissan team and drivers. We traveled with them for a week, which was pretty heady stuff at the time.”

Jobst has moved on from racing, however, and looks forward to retiring to hiking, fishing, snowmobiling, mountain climbing and hunting. “Fabrication, machining and finding new ways to fix things has always been a passion, too, among the many others. I’ll pursue as many as I can and as often as I can.”

Up until 12 years ago, Jobst said he didn’t have a plan for selling the business. “It became apparent that as Jeff grew with the business, he was the right person to take ownership. I didn’t intend to retire early at 59 — I just hadn’t thought about it very much. I’m still passionate about the industry and involved in ASA Northwest.”

Jobst helped create and launch the association’s Independent Technicians Automotive Committee (iTAC) Apprenticeship program and intends on being involved with it for a few more years. “It’s probably more of a highlight from my auto repair shop owner career along with other ASA Northwest initiatives such as ATE (Automotive Training Expo).”

And as for who will be Miller’s successor? “I’ll always be on the lookout for the right person,” Miller said.