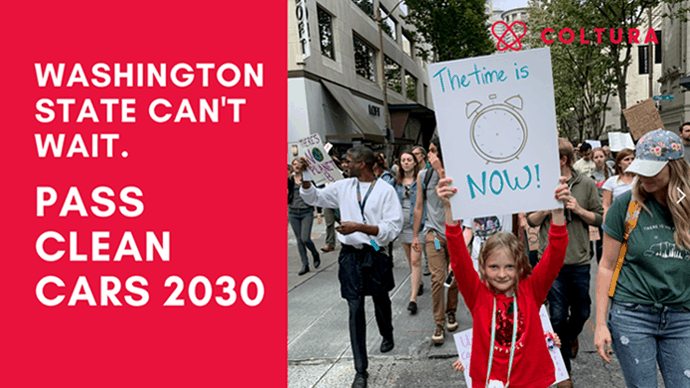 The bill was drafted by lead sponsor Rep. Nicole Macri (D-Seattle) with assistance from Coltura, a Seattle-based nonprofit working to improve climate, health, and equity by accelerating the transition from gasoline and diesel to cleaner alternatives.

Bill requires all model year 2030 or later passenger and light-duty vehicles sold in Washington State to be electric; 59 percent of voters support a 2030 EV requirement

Seattle—Clean Cars 2030, a bill reintroduced in the Washington legislature with 27 co-sponsors and strong support from constituents, had a hearing Monday in the House Transportation Committee. The bill, HB 1204/SB 5256, requires all model year 2030 or later passenger and light-duty vehicles sold in Washington State to be electric.

People can keep and sell model-year 2029 and older gas cars as long as they like. The bill was drafted by lead sponsor Rep. Nicole Macri (D-Seattle) with assistance from Coltura, a Seattle-based nonprofit working to improve climate, health, and equity by accelerating the transition from gasoline and diesel to cleaner alternatives.

Gasoline and diesel on-road emissions are the single biggest source of human-caused carbon dioxide emissions in Washington, at nearly 30 percent of total emissions. With Clean Cars 2030, Washington would join more than 20 countries that plan to phase out sales of new gas cars.

Since the bill was introduced last year as the first-of-its-kind in the U.S. to set a deadline for the transition to electric vehicles (EVs), California, Massachusetts, and New Jersey have announced 2035 targets for ending sales of new gas-powered cars.

“Clean Cars 2030 will ensure that our policy goals and actions move us rapidly toward a 100 percent clean energy environment and keep pace with what is now a global trend toward vehicle electrification,” said Rep. Macri. “This bill is not only good for the environment, but it will also bring important equity to low-income households by significantly lowering fuel costs and car repairs while stimulating the economy by hastening a boom charging infrastructure construction and EV manufacturing. Clean Cars 2030 is a commonsense solution that will usher in a cleaner, healthier future for all Washingtonians.”

EVs with more than 400 miles of range are already available, and dozens of new models of electric cars, trucks, and SUVs are coming to market. By 2025 or sooner, EVs are forecast to reach price parity with similar gasoline models.

New technology allowing EVs to charge nearly as fast as it takes to fill a tank with gas will also be widely available and convenient by 2030. Research commissioned by Coltura and conducted by Yale University, George Mason University, and Climate Nexus found 59 percent of Washington voters support a 2030 electric vehicle requirement.

“There is no reason to wait beyond 2030 to commit to a clean transportation future,” said Matthew Metz, co-executive director of Coltura. “The transition period is achievable, and it will give automakers and utilities certainty about the EV market, which will further accelerate innovation and progress. We must put the pedal to the metal. It’s time we move beyond gasoline and eliminate our biggest source of carbon emissions in Washington State.”

Published in Northwest, Regions and Technology