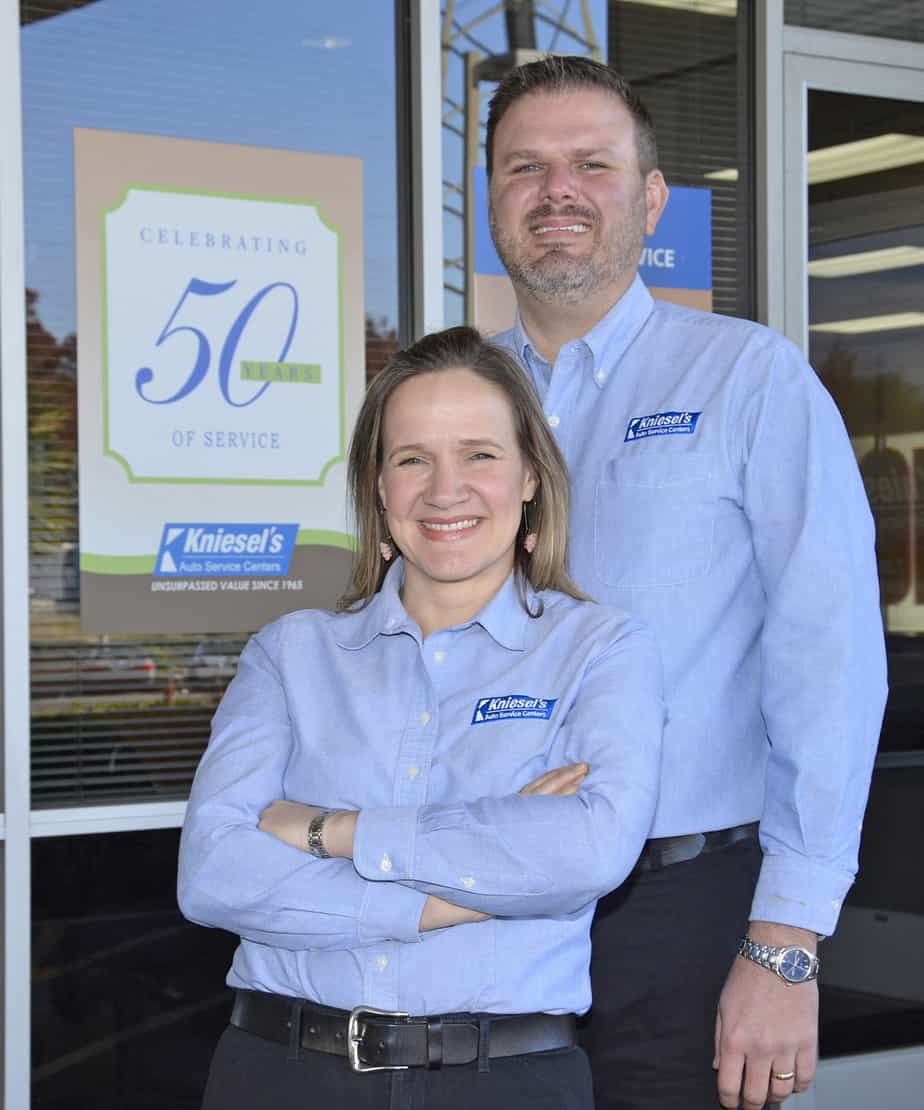 Once Brent and Jody Kniesel established their shop's basic metrics, they began to see margins increase.

Up from the ashes and ‘fighting the fight’

Brent Kniesel had no automotive or management experience when he took over his family’s shop, which was $150,000 in debt and hemorrhaging $10,000 a month. Today, it has three locations.

Citrus Heights, Calif.—Brent Kniesel wasn’t raised in the family business, launched by his grandfather more than 50 years ago, as his parents divorced at a young age and he grew up out of town. He was a former high school dropout, had six months of junior college under his belt, and no automotive or management experience when he and his wife, Jody, took the helm of Kniesel’s Auto Service Center in 1997.

At the time, it was a single-location shop and failing.

The couple soon became involved with an RLO Training Bottom-Line Impact Group that helped develop benchmarks and processes. “It was life-changing. We had no idea what our profit margins should be, how to build a business model, or what our labor rate should be. Everything had been done off of suggestive lists and customer complaints — we had no clue.”

Once the shop established its basic metrics and had them entered into its management system, the Kniesels began to see margins increase, which, he said, “created a little bit of relief.”

From that moment on, Kniesel’s Auto concentrated on developing processes and training on those systems.

Today, Kniesel’s Auto Service Centers has grown from its original location in Citrus Heights to an additional two in Sacramento and Roseville. “We were able to pay off debt, save, and breathe a little. It’s sounds cliché to say, but ‘What you don’t know can hurt you,’ and there’s truth in that.”

The shop operates with three to five service advisors and between five and seven technicians per location. Car counts, he noted, are back to pre-Covid-19 numbers. Kniesel estimates that his ARO in 1997 was $100-$150. Now, the shop’s ARO target is $549 a ticket, though it’s exceeding that goal with an ARO of $603, which also includes express services.

“We learned to make every car in our bays count and that less is more. We became very intentional about our process with the vehicle and being thorough with inspections, as well as how the findings are presented to clients and how we ‘ask for the sale.’”

Kniesel’s Auto features menu services for its clients that range from $65 to $126 per hour. There’s also a three-tiered labor rate from $139 to $159 an hour, depending on the skillset involved. In addition, the shop has a labor-rate multiplier that increases those rates based on certain years of vehicles and makes and models. “We charge a premium above those base rates for Europeans, heavy duty and larger applications, for example.”

Many shop management systems don’t allow for variable rates, however, but they changed to Protractor a few years ago. “It’s one of the best, if not the best system out there,” Kniesel said. “They are the most progressive with software development and top integrations with partnered software. It offers an abundance of options that makes it customizable based on shop needs and strategy.”

Kniesel’s Auto Service Centers have also been aligned with Kukui for a number of years. “It’s a great platform and we’ve had great results.”

While automotive repair has never been Kniesel’s passion, it serves as a means to an end. “The driving force behind expansion was more than just putting money in our pockets,” he said. “My vision is to have up to five locations in order to support local and international projects — we want to give back.”

The Kniesels are Christians and faith-oriented with participation in missions to Mexico and Rwanda and local charities. The couple also has six adopted children from the foster care system.

“We’ve seen some of the challenges — for lack of a better word — within the system, so we’ve partnered at times with adoption agencies for change. We’ve also been involved with women’s shelters and local schools and churches.

“The older I get and the longer I’m in the industry, the more resolve I have in my gut and intuition. As a business grows and support is increasingly pursued, the work becomes more and more delegated. You’re entrusting more to the team and creating leadership around you. There must be trust and openness to change and adaptation.

“It’s an amazing industry with amazing people. The biggest struggle we have as shop owners is isolation and it’s crucial that we have networks and associations such as ASCCA to provide insights to help one another.

“If you’re willing to fight the fight, the industry can be very rewarding.”