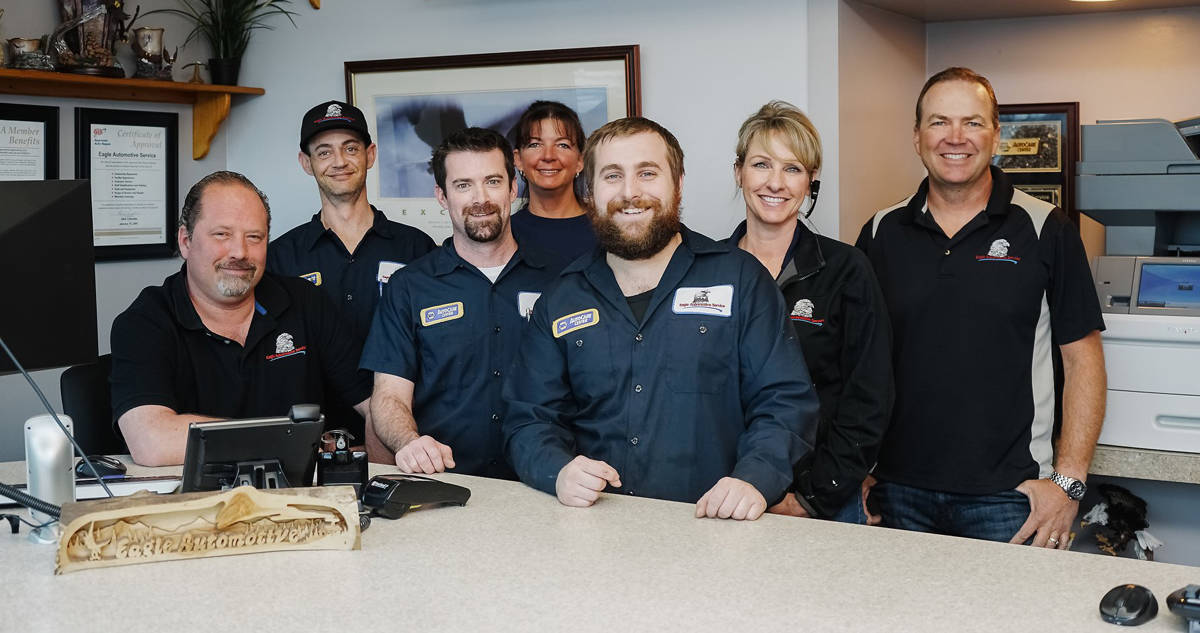 By hiring new talent according to the shop’s environment of relationship building, it made the culture stronger, which, in turn, attracted new employees with higher-level calibers and technical abilities, says Brian Bates (right).

Finding good employees can been challenging, but it doesn’t have to be that way, says Brian Bates of Eagle Automotive

“We wanted to know who really sought to grow with the company, and who was aligned with our values and purpose,” Bates, owner of Eagle Automotive’s three locations in Littleton, Colo., told Aftermarket Matters Weekly. “If they didn’t, or weren’t on board with the direction the company was headed, then they went on to do something else, somewhere else.

“We operate by building relationships with our customers and community, as opposed to being purely transactional.”

Smith, who is managing partner of Herzberg Smith & Co., entered the industry a few years ago after working with big firms in numerous segments to help them grow. When he met with automotive aftermarket peer groups, he asked what were some of their challenges — finding good employees, they responded.

“They told me there wasn’t enough talent out there and they couldn’t hold on to them,” he said. “In reality, however, there isn’t a shortage of top people — or ‘unicorns’ — if a shop has something to say to them. When a business has a system and culture that attracts the best talent and the best talent is looking for a business like that to join, they’ll find each other.

“There’s no shortage of good talent, it’s just a matter of connecting despite all the noise out there.”

If you build it, they will come

In the spirit of, “If you build it, they will come,” Herzberg said, “Build a system that has a strong future that can find and keep those unicorns, to be able to grow and attract more talent.”

Having the right system in order to accomplish that is a process, he adds. “It’s an investment process that involves understanding people, where the industry is going, knowing your strengths, what your customers mean to you and who they are. It becomes just a question of, ‘How do you get there?’ Brian and his team are among the best I’ve ever seen in accomplishing that.”

Bates, who is also past president of NAPA AutoCare Elite BDG Colorado, said that initially there was some employee turnover at his NAPA AutoCare Centers in the beginning, but he has experienced none in the past year, “which is nice, because we’ve gone through some time periods when it was difficult to keep anyone in place for more than a few months at a time.”

Bates attributed that time period, in part, to the hiring process at the time. “I started to become a student on how to properly hire people because of the turnover we were having. Sometimes it would dawn on me that a certain person shouldn’t have been in the industry to begin with, and it was a disservice to them to hire them, as well as to our customers, myself and our team. I would hire them because of their production ability and technical skills, rather than how they fit in well with the company.”

By hiring new talent according to the shop’s environment of relationship building, it made the culture stronger, which, in turn, attracted new employees with higher-level calibers and technical abilities.

Hiring has now become a “very holistic approach” rather than what has been traditionally considered a chore, Bates said. “It’s not about, ‘What job do I need to fill, where do I advertise for it and how much do I pay?’ The mentality can’t be, ‘Well, I just need to hire people and we’ll make it work.’”

In those cases, a shop is “shielding” the interviewee from a shop environment if it’s not a good culture. When the new hire comes to work, they can feel mislead. “It might look good on the surface, but then entirely different when the rubber meets the road.”

Alternatively, Bates said that if a shop is transparent about its culture that might not be strong, then it’s likely prospective candidates won’t join the team to begin with.

“Having a great culture is so important, and people can simply figure that out for themselves by just going to online reviews — ‘What kind of place is this, where are they going and what are they doing in the community?’”

The high performer that shops want on their teams is looking at those traits and characteristics. Many of the best hires Bates has had didn’t come from a job board — they knew somebody who knew somebody that was aware of his shop as great culture and they came knocking, he said.

“They aren’t necessarily looking for a job, and if they are, they aren’t thrilled with the idea of visiting job boards and filling out blind applications. Many turn to their friends in the industry and say they’re really not too happy where they are working and they would move to a different shop if it presented the right opportunity.

“The people we seek out don’t want ‘just a job,’ they want to be part of growing something together that has a clear vision,” Bates said. “They want to have that opportunity to build a career and reach their highest potential, not stuck in a position where they are just pawns in a business.”

A major component of having good culture is having good management, he added, who can challenge shop leadership and also be approachable with those they work with on a personal growth level. “It can be difficult for some owners to do, while others do it very well in bringing a team together.”

If business takes a downward turn and things start going poorly, then there can become a sense of urgency and stress. “It’s important to have someone who can focus on the team and operations while the owner can concentrate on finances, suppliers, being in compliance and growing the business.”

Today, Eagle Automotive’s corporate platform has come together as leaders are in place, everyone is “gelling as a team,” and Bates’ stores are being run independently by management.

“We’ve become more scalable, whereas before I was running three separate stores — trying to do the hiring, facility management, etc. — and I was running into a wall. It was challenging managing my three stores as it was, never mind adding another one.”

Now that Eagle has the right culture and staffing in place, Bates said the business could add on another three or four locations with his current team by gradually scaling up.

“We have leaders in each store who aren’t in management, but who are ready to take management positions. Taken together with the reputation we have within the auto industry, it puts us in a position to grow. We have the business model and we can train the business model recipe — recruiting, retention, and finances to support growth. We’ve built our internal chemistry to grow our team, both individually and together as one.”

Bates was quick to note, however, that he still remains involved in what his team is doing in the shop level.

“I’ll never be absent from any of that — I still enjoy talking with team members: hearing about them, watching them grow, being supportive of them, whether it’s about business or at a home.”