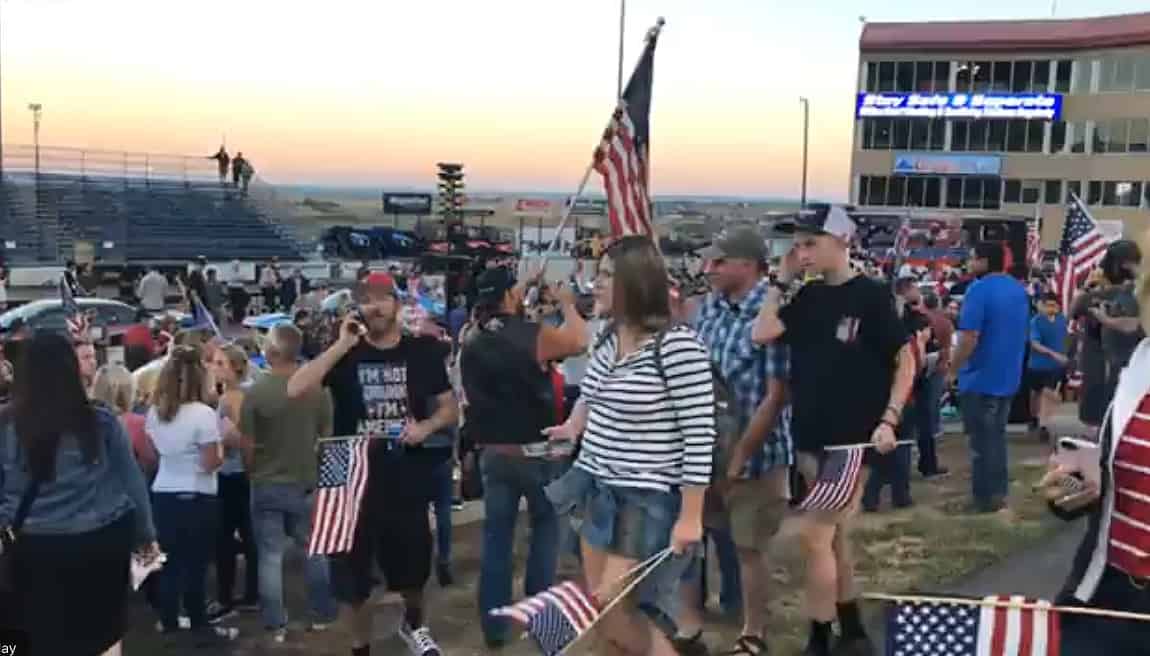 Thousands of attendees arrived with traffic backed up to the beginning of the speedway's C470 off ramp exit, as vehicles waved U.S. and Colorado State flags, and many participants wore red, white and blue clothing.

Morrison, Colo.—The Bandimere family invited supporters to their “Stop the Covid Chaos” rally on Tuesday night at Bandimere Speedway in order to “Join with us as we celebrate God and country and the people of the great State of Colorado,” they said in a press release.

Thousands of attendees arrived with traffic backed up to the beginning of the speedway’s C470 off ramp exit, as vehicles waved U.S. and Colorado State flags, and many participants wore red, white and blue clothing that the speedway encouraged for a group photo. The majority of supporters did not wear masks or practice social distancing.

The rally was held to highlight two lawsuits that are being filed against Colorado policies related to the pandemic. Bandimere Speedway is filing against Jefferson County for its health regulations on businesses and state orders designed to limit the spread of Covid-19.

“The crux of our lawsuit is that the governor is violating the separation of powers,” said Neville during an interview at the rally with ABC’s affiliate Denver 7. “People are fed up, they want to get back to work they want to get the economy back up and that is what most of the people are here for.”

Jefferson County Public Health sent a letter to the speedway on Tuesday that told the track to follow all public health orders and stated, “Given the absence of an approved plan for this event, we are hopeful that Bandimere intends to cap attendance at 175 attendees or less.” The health department stated it had not given approval for the rally.

In July, the health department sued Bandimere for holding a fireworks celebration. That event also had an estimated crowd size that numbered in the thousands.

There was a presentation to explain why the Bandimere family has decided to file a lawsuit since Gov. Polis, according to the press release, “Has not honored the spirit of the emergency powers law by repeatedly extending and expanding his authority and, regardless, because his Executive Orders and Public Health Orders are unconstitutional.”

Everyone was invited, they said, “To join us as together we express our God given right to demand a stop to the COVID Chaos Governor Polis has inflicted upon all of us with his Executive Orders and Public Health Orders.”

Neville, Malkin, Randy Corporon and the Bandimeres co-hosted the event that featured numerous Trump re-election signs and a pro-Trump campaign bus that was parked on the track.

Gates opened at 5 p.m, and the rally started approximately a half-hour after its scheduled start at 6 p.m. The highlight of the event was the planned photo of all attendees on the track racing surface at the rally’s conclusion.