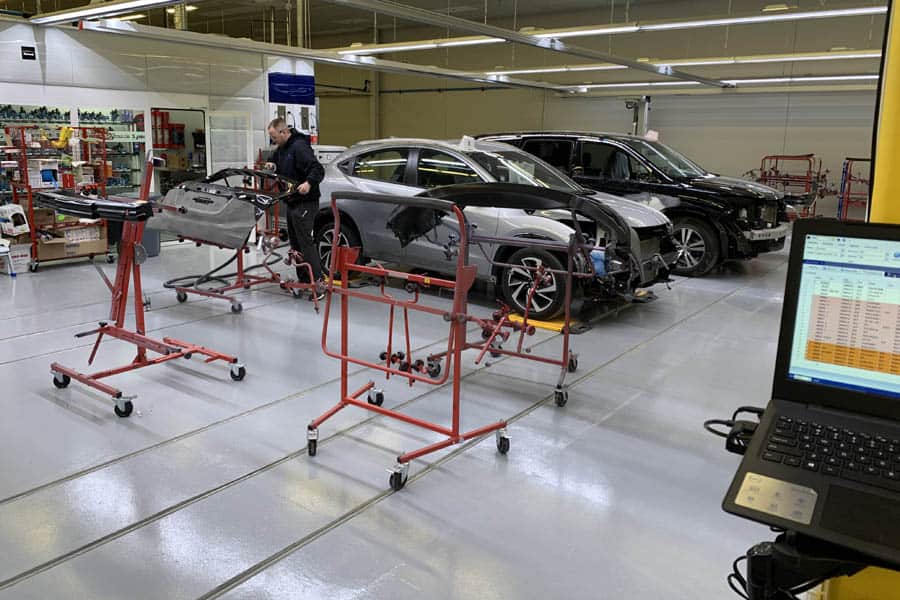 In 2018, Symach and DCR Systems formed a strategic partnership, combining their strengths to build “tomorrow workshops” for the collision repair industry.

“It’s truly unlike what anyone has ever seen,” said Michael Giarrizzo, CEO and president of DCR Systems, based in Ohio. “It’s really a super shop of the future taking in the full thought processes of both Symach and DCR Systems and changes the way collision repair work has typically been done.”

In 2018, Symach and DCR Systems formed a strategic partnership, combining their strengths to build “tomorrow workshops” for the collision repair industry.

“What we like about DCR Systems and Symach was the fact that they have been able to systemize and streamline all of the different variables involved in collision repair and employ their processes,” said Steve Lindsay, vice president of Lindsay Honda/Acura. “We will now be able to provide our clients a faster and higher-quality collision repair offering that’s done in a more predictable environment and with less energy use. This certainly aligns with our business principles.”

The new collision repair facility, which is affiliated with one of the country’s largest Honda and Acura dealers, uses Symach’s equipment and technology along with DCR Systems’ proprietary process-based production system. The facility is operated by DCR Systems and includes Symach’s FixLine repair process as well as the Symach Paint Application (SAP) Process.

“This synergy helps Lindsay Honda/Acura eliminate many of the inefficiencies associated with auto body repairs and ensures employees can operate the machinery in the most high-performing way,” said Osvaldo Bergaglio, CEO of Symach. “Together, we have created a world-class collision shop.”

Lindsay added, “We trusted Symach and DCR Systems to design the entire facility, so we were assured there is no loss of efficiency. We’re excited to see the use of these technologies that they employ globally here in Columbus.”

A systematic process was set up with clear-cut operating procedures and quality inspection points geared around manufacturers’ guidelines, Giarrizzo said. DCR Systems advised on the construction process, and recruits, hires and trains its employees as well as handles all regulatory compliance.

Lindsay Honda/Acura was designed using what Giarrizzo referred to as a “DCR two-cell environment” due to the sheer demand of work they anticipate. This is expected to offer tremendous energy savings and more efficiency for the facility, which uses Symach’s SprayTron paint booth and KombiTron drying cabin.

Bergaglio said that the KombiTron dries paint using an Easydry robot, rather than a burner, and daily production with two painters is expected to have the capability of 16-20 paint cycles per day.

“Normally, each cell would have its own paint line and booth; however, in this environment and with the capacity of the KombiTron, Lindsay Honda/Acura Auto Body will be able to flow both production lines into one paint line,” Giarrizzo explained. “The production team is also positioned closer together so it’s much easier to see what’s happening on the shop floor and communicate regarding how everything is flowing through the system.”