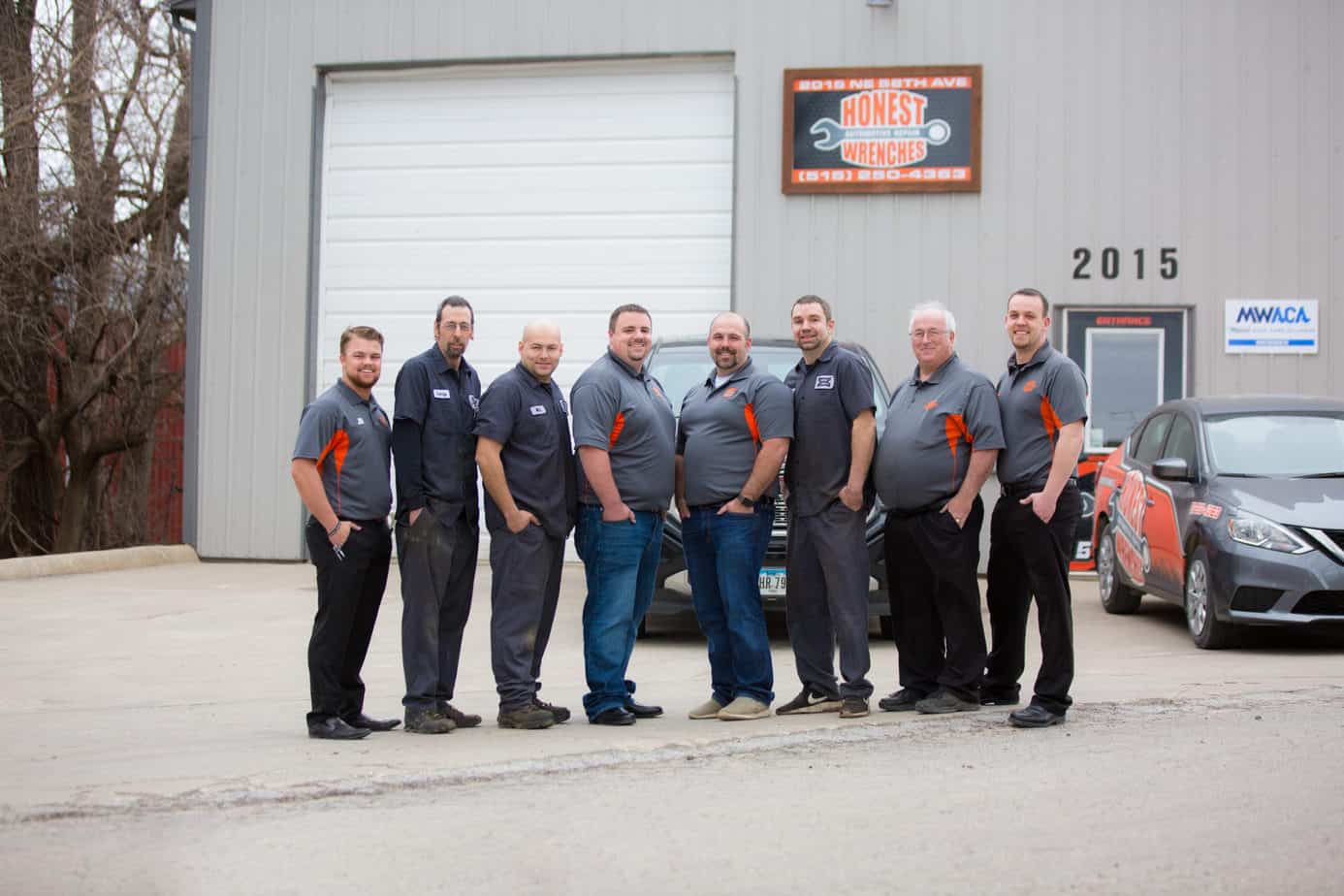 “We’re not shooting for profits right now. Profits aren’t important to us, but surviving and getting pay checks to employees is,” Travis Troy says, adding that he and his partner, Josh Mullins, both donated their salaries to their staff for five weeks.

Shop transparency with employees is more important now than ever

“We told them we’d get through this together as a team and a family — no one gets left behind. You could just see the relief and the pressure lifted off of them,” says Travis Troy, co-owner of Honest Wrenches

Des Moines, Iowa—Travis Troy, who co-owns Honest Wrenches in Des Moines, Iowa, with his partner Josh Mullins, says that communicating with their staff and customers has become paramount since the coronavirus crisis landed.

When the pandemic first arrived, the shop held an employee meeting to let them know the company was financially stable and that their nine jobs were not in jeopardy.

“We told them we’d get through this together as a team and a family — no one gets left behind. You could just see the relief and the pressure lifted off of them,” Troy said. “We don’t live lavishly and we were able to be financially prepared for something like this with a strategic approach.

“I can’t stress enough to business leaders and shop owners that transparency is more important now than it’s ever been. If you show an ounce of fear in your face, employees will multiply that 100-fold because they don’t know what you’re thinking and they’ll start making assumptions — which are often worst-case scenarios.”

Now there’s a weekly Covid-19 meeting and team members are given updates and what the shop’s break-even points are. “We’re not shooting for profits right now. Profits aren’t important to us, but surviving and getting pay checks to employees is,” Troy said, adding that he and Mullins both donated their salaries to their staff for five weeks.

The shop has been also active in applying for assistance and received its PPP last Thursday. It also relies heavily on its accounting firm, Paar, Melis & Associates, in Maryland, he said. “They have been hands-down the most help for my business throughout this crisis with their advice. The amount of information they provide the automotive industry is incredibly useful — I basically tossed them the keys to my business.”

Troy anticipates normal business and car counts will begin to return in mid-June, but won’t get traction until July.

“I think July, August and September are going to be some of the best months that anyone has ever had.”

Similar to many shops, Honest Wrenches has closed its lobby for the safety of its employees and clients, though an unexpected benefit has been the acceleration of the company’s text-to-pay feature, Troy said.

“I believe it’s going to be the wave of the future for us instead of returning to a terminal kiosk. It’s very convenient for the customer and takes away the financial strain at the counter when they come in — and we also get to have better conversations with our clients. There’s less emotional attachment to the dollar.”

While the shop has always offered free vehicle pick up and delivery, loaner vehicles and shuttle service, Troy estimates pick up and delivery now accounts for 90 percent of its business. “We’re going to try and continue to do that because it’s so convenient for our clients. When the world turns back on, then our loaner vehicles will come back because they’ll need the transportation.”

Honest Wrenches leverages social media to alert customers that the shop remains open as an essential business and regularly updates its Facebook, Linkedin, Instagram, and Youtube accounts, among other platforms.

“It’s important that we stay out in front of our clients. We try to post content and a video every day to engage our clients and get them thinking about us. It’s become really important and it’s something we should be doing all the time, regardless of the pandemic. It keeps our name in top-of-mind awareness.”

“We’ve always done those, but we’ve got to make sure we’re on top of our game because with the world being slower, it gives people time to think a little bit more — where they’ve been doing business and who might be shining more than the next person right now. You really have to pay attention to that.”

Car count is down approximately 50 percent and sales are down 70 percent, he said. “We’re getting cars in, but people are being very frugal. They have to be careful, which we understand, and they just get fixed what’s broken. We don’t put any pressure on our clients because we know what they’re going through, and we want to be remembered as the people who just cared.”

Honest Wrenches has called its elderly and high-risk customers to make sure they are safe and if there’s anything the shop can do to help them. It’s not a sales call, he said. “The more we can keep them at home, the better off they’re going to be. We got a lot of good feedback for doing that.