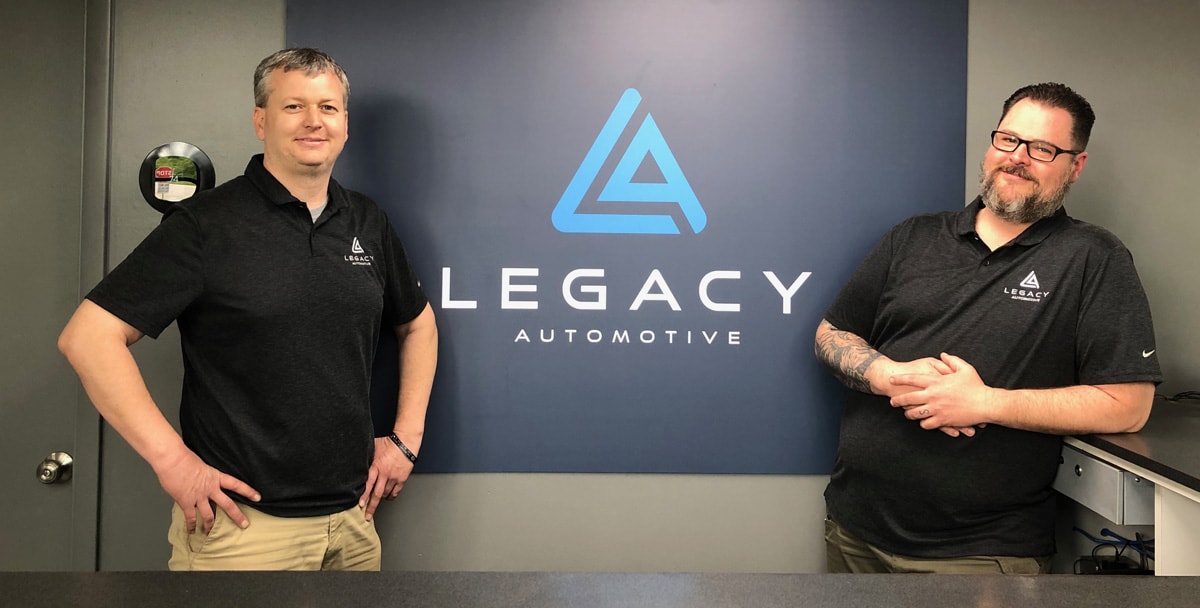 Missouri shop leaves Midas to open as an independent

Once the 20-year Midas contract ended, Jarrod Eckman was ready to launch a shop rebranding

Fenton, Mo.—Third-generation shop owner Jarrod Eckman hung up his affiliation as a Midas franchisee and rebranded his business this month as an independent shop, Legacy Automotive, in Fenton, Mo. The change came after 52 years of the Eckman family running with the Midas moniker.

“We had been waiting for the 20-year contract with Midas to run out,” he said. “We’re also a client of ATI and part of a 20 group, so I’ve learned a lot about the independence of running your own shop — I grew an appreciation for it. While we were a Midas business, we always ran it very similarly to an independent. But we were held to the company’s stringent policies, which could be frustrating. It was time to make the change.”

Eckman comes from a long family line in the automotive repair industry. His uncle, Patrick Adams, was a technician in Springfield Ill., in the mid 1960s, then he and Eckman’s grandfather went in as partners in one Midas shop in Pennsylvania.

By the 1980s his grandfather had sold his stores and Eckman’s parents had built up to seven stores, which they kept up until the early 2000s. He purchased three of them in 2005.

“I’ve known Jarrod since he was a kid and his grandfather, who was one of the first Midas franchisees in the St. Louis area,” said Mike Mueller, account manager for parts distributor Stone Wheel. “The ‘Legacy’ name is very fitting. He’s worked very hard to get to where he is today.”

As Eckman grew up working in the family business, it had a six-day workweek for the past 20 years. He just recently changed the shop’s schedule to five days, which he said was an important change.

“It easier to keep technicians with a five-day work week,” he said, “though we’ll all come to the shop on a Saturday once a month for three hours of training.”

The shop’s general manager, Danny Ingram, and Eckman foster a healthy and “fun” work environment. “Danny has one-on-one meetings with our staff for up to 30 minutes each to discuss what’s on their mind and vice versa. He’s a phenomenal GM and keeps the staff happy,” Eckman said, adding that Ingram had come to the shop outside of the industry, having worked in the banking world and communications.

“He came to us equipped with a lot of big company experience, from HR know-how to management style.”

As the industry has evolved, Eckman migrated away from a focus on exhaust and brake jobs to more general repair, and dialed his three shops down to one location, which features a six-bay, 4,000-square-foot facility with four technicians and Ingram. Eckman assists with service writing and parts ordering for the business that realized $1,076,000 in annual revenues last year with an ARO of $281 and a weekly car count of 74.

“I wanted to hone our craft,” he said, adding that the shop has expanded its services to include engine, transmission and clutch repair. “It’s also better having one location for its simplicity and focusing on customer service and quality, which have always been top priorities.”

Legacy Automotive, which markets itself as having a “small-town feel with a high-tech operation,” now conducts digital inspections using Bolt On Technology. “It was a good decision,” Eckman said. “The DVIs are a hit with younger customers, though I didn’t anticipate how popular they would be — and Text to Pay — with older generations, and being able to text message results.”

Legacy’s new website, built by Kukui, and its CRM software was helpful in sending out postcards to the shop’s customer base to inform them of the rebranding.

“Kukui has a lot of marketing features, which is why we decided to go with them,” Eckman said.

“They have an incredible, nationally recognized program,” Eckman said. “We give them a couple hundred oil-change vouchers each year that they sell for $15. They get to keep the money and we get cars in bays.”

An industry poised for growth, opportunity

Sourcing cleaning products and gloves for staff and customer care hasn’t been an issue as it has been for many shops, as Eckman said he anticipated the demand as the pandemic was beginning to unfold.

“The first three weeks of March were rough for business, but since then, it’s been coming back. It was like some slow winter weeks — we were fortunate.”

Recent 20 group discussions have focused on opportunities for shops that are well positioned to survive the crisis with a potential to expand as other shops close, he said. “When the coronavirus first hit, we had group Zoom meetings twice a week. The shop owners who have their act together and planned accordingly are going to do very well once we get out of this.”

He added that there’s going to be opportunity for more service and repair because people will hold on to their vehicles longer as the shock of the pandemic reverberates throughout the economy. “Assuming we avoid another ‘Cash for Clunkers’ program,” Eckman predicts the market will be ripe for industry growth.

“We have a lot of customers who can afford to buy a new car, but many remember the economic crisis of 2008 and will hesitate — it’ll be good for business.”