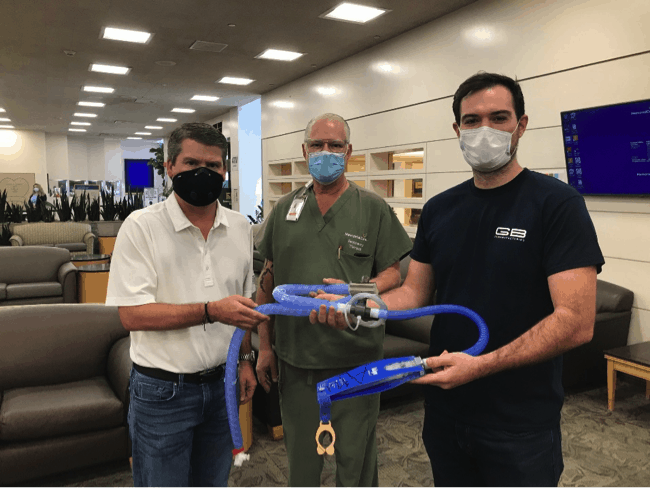 Long Beach, Calif.—Since the start of the COVID-19 pandemic, GB Remanufacturing and its team members have been looking at ways they could make an impact at either the national, state, or local level.

They tried contacting federal agencies, the Governor of California’s office, the Mayor of Long Beach’s office, and numerous House of Representatives throughout California and Los Angeles County to see how they could make a difference, but to no avail, said Michael Kitching, president and CEO of GB Reman.

However, he reported that none of the agencies or offices replied. Kitching then reached out to Stephanie Aparicio at Long Beach Memorial Medical Center, and the wheels were set in motion.

The director of Biomedical Engineering at Long Beach Memorial asked if GB Reman could help produce a critical ventilator part that was in short supply, he said, Kitching explained that the manufacturer developed an emergency protocol to convert conventional ventilators into pressure-controlled units for use by critically ill patients battling Covid-19.

Doing so would significantly increase the number of available ventilators, which was identified early on in the crisis as a weak link.

That’s when Kitching said he challenged his engineering department to come up with a solution and to make it fast. Led by Zack Evert, GB’s engineering manager, and Joe Evert, director of operations, they decided on a different approach.

“We had to come up with a different solution,” said Joe Evert. “Our goal was to make the part easily machinable out of a material that could withstand the disinfecting procedure, allowing it to be used multiple times. This would reduce the total number of units required while also allowing us the ability to scale production by the thousands if needed.”

Zack Evert designed the adaptor to be manufactured out of a readily available material that could easily withstand the sanitation procedure – making the adaptor re-usable. Prototypes were made on a CNC machine and sent over to the hospital for approval. The team over at Long Beach Memorial were astonished that the adaptors were engineered and produced in less than a week. The adaptors were approved the very next day.

Team GB Reman delivered the life-saving adaptors two weeks ago, just before a surge in Covid-19 patients was expected, according to hospital officials.

Kitching said his company is ready for more projects like this to help in fight against Covid-19. He added that this particular project was both special and personal.

“I was born at Long Beach Memorial, and so were our two children. As a Long Beach native and local business owner, it felt great to help the local community, but we are open to helping anywhere and any way we can.”