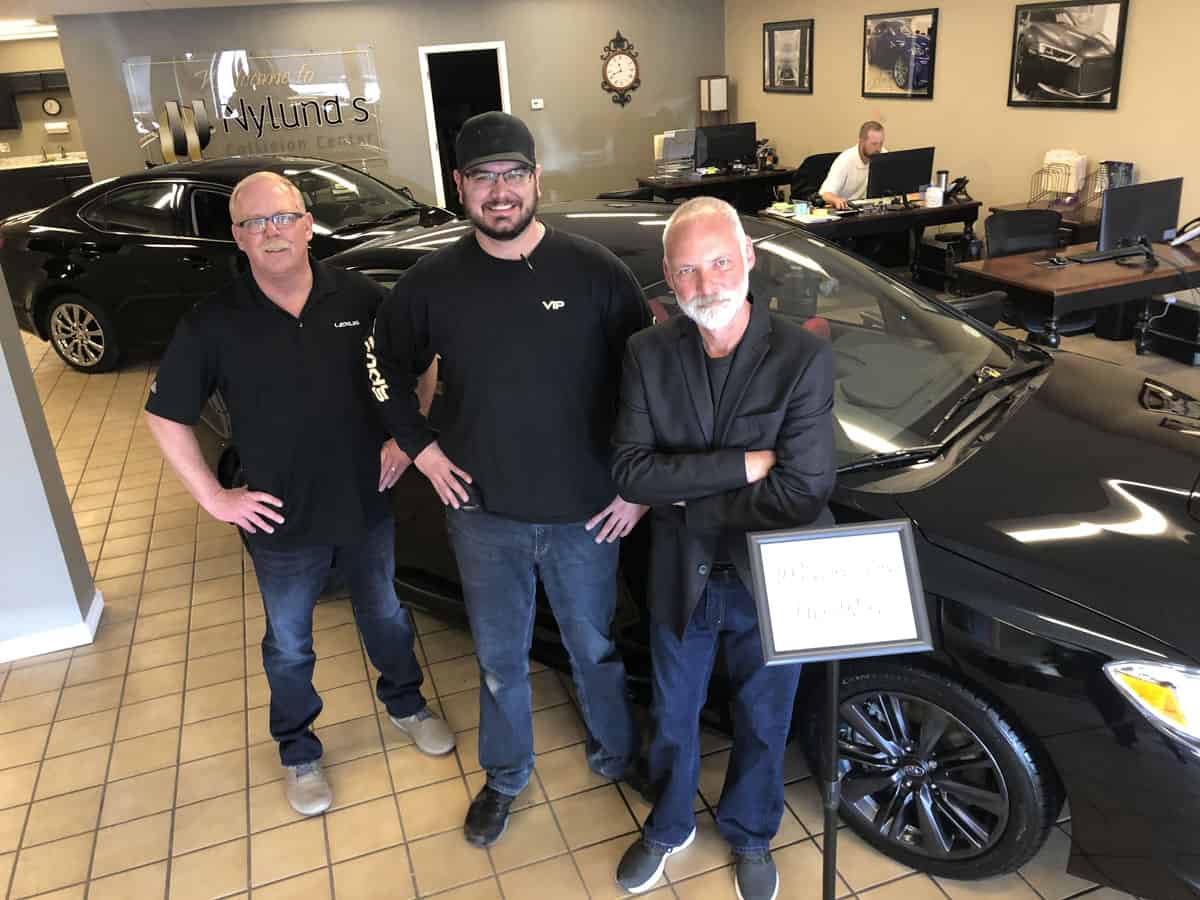 FROM LEFT: Nylund's Collision Center's GM of the front end John Groome, GM of the backend Brian Forester and owner Robert Grieve stand before a vehicle to be delivered to a customer. All repaired cars are driven into the shop's showroom for customer delivery with the customer's name on a welcome sign on a pedestal. "It delivers on the customer experience," Grieve says.

Englewood, Colo.—While Colorado mechanical shops and, to a lesser degree, collision shops, have the benefit of ASA Colorado to network, share ideas and obtain training, the Colorado collision community lacks a full-throttle industry association dedicated to their segment.

“There’s nothing. This is the wild, wild West,” said Robert Grieve, owner of Nylund’s Collision Center in Englewood, Colo. “The majority of the shops here, as I understand it, have connections with at least one or more DRPs. And if you start putting an association together, then it’s going make insurance companies uncomfortable.

“Everybody has their own business model and what works best for them. DRPs aren’t part of mine, never have been and never will be.”

If Colorado shop owners were to come together and form a regional industry-specific association and Grieve was tasked with writing its mission statement, he said he would focus solely on education.

“I would bring in speakers who talk about the future of vehicle technology and what is presently rolling off the assembly line. It wouldn’t have a legislative agenda, though there’s room for that in other venues, and it would avoid insurance-bashing rhetoric, which would only lead to trouble.”

If shops become more informed and educated, he added, then they’ll be able to share that education with insurance adjusters in order to prove their estimates, rather than fight for their estimates. As far as insurance companies go, Grieve said “you can’t change a leopard’s spots.”

“They will do everything and say everything not to pay. But when we show them proper documentation and OEM procedures, I’m 90 percent successful in getting them to pay for it. And if they don’t pay for it, then the vehicle owner pays for it.

“We’ll go into the actual OEM sites — not third parties — pull the information and show it to them.”

Many shop owners make the mistake of focusing too much on labor rates, he said, “which really aren’t that important.”

“If you concern yourself more with becoming educated on operations and getting paid for procedures that are owed on a repair, then the rates mean nothing.”

Rather than focusing on the needs and demands of insurance companies, Nylund’s Collision Center concentrates on the “guest experience,” from beginning to end.

“I’ve always believed that if you truly just focus on the guest, then you don’t have to chase the money. The money will come on its own. And we’re a living, breathing organization that subscribes to that philosophy and flourishes — and it makes us different.

“We fight for the guests to get them the most reimbursement from the insurance companies for the repairs we’re blueprinting. We only fix vehicles according to manufacturer specifications, otherwise we won’t repair them — it’s that simple. We want the cars fixed properly and we don’t want lawsuits.”

The shop uses only OE parts and refuses to install aftermarket products to ensure safe and proper repairs, which will often result in an out-of-pocket price difference that the customer will sometimes have to compensate for.

“Customer education is key and we have to set the right expectations. We only do one quality of work here, and whether it’s a Lexus, Subaru, BMW, Mercedes-Benz or Audi (brands that Nylund’s exclusively repairs), they all get the same love.”

Grieve said he anticipates the shop-DRP relationship will evolve into something else entirely in the future, and shops who rely on the current business model will need to replace it.

“The insurance companies will whittle down their relationships to national contracts and send the majority of their work to big-box MSOs as best they can. It comes down to efficiency from their perspective because it’s easier to work with one large entity than several smaller ones.

“The present shop-DRP model will evaporate — that’s what my gut tells me.”

As vehicle technology becomes increasingly complex, he said the future of collision repair will be driven toward brand specialization for shops. “You can’t know everything about every car. Each vehicle has its own nuances.”

As the Denver-metro and Front Range population has exploded in recent years, so has the number of MSOs in the region.

“It’s a big market and we now have up to a dozen of each of them. They’re everywhere. The MSOs used to be buying up independent shops, but now I see they’re building their own facilities.”

In order to “work on the business” rather than “work in the business,” and contribute time and energy to the industry at large, Grieve says he has a strong staff and team in place.

“I have brilliant people who surround me here and they’re the best of the industry. We’ve built a brand that people want to come work for. If I have a spot open, I say come on down, and if I don’t have an opening, I make one for the right person.”

Nylund’s employees two general managers, one who focuses on the front of the business, John Groome, while Brian Forester concentrates on the backend. They both work with the “top-notch” office staff, and a “rock star” shop team, Grieve said.

While Colorado may not have a collision repair-specific organization for shops, Grieve stays informed on the industry as a member of the Society of Collision Repair Specialists (SCRS). He is also now on its board of directors as a result of attending meetings and interfacing with other members.

“I’m here every day, working with everybody, but I’m not out there writing every estimate, dealing with adjusters, writing supplements or handling productions. I have people in place to do that and I work with them — and I love it. They afford me the time to devote to SCRS, which is a great organization.”

“They have such a wealth of information and support for the industry,” he added. “I believe in giving back, and so many people in my life have contributed to helping me get to where I am today that it’s my job to help other people get there, too.”