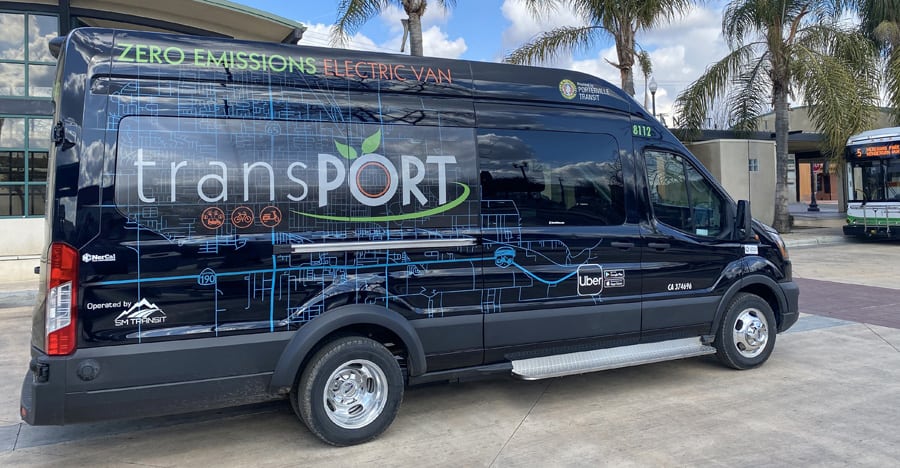 The City of Porterville’s new all-electric passenger vans will be used for transporting residents for curb-to-curb, on-demand service.

The 12 vehicles, all Class 3 Lightning Electric Transit Vans, were developed by Lightning eMotors, a manufacturer of commercial electric vehicles for fleets based in Loveland, Colo.

The city’s new all-electric passenger vans will be used for transporting residents around the community, such as from home to work and for shopping and other services. The electric vans will replace transit buses on routes with low ridership, allowing residents to use an app to get on-demand, curb-to-curb service.

“We look forward to serving our residents with quiet, zero-emission passenger vans,” said City of Porterville Transit Administrator Richard Tree. “Air quality is top of mind in Porterville and throughout California. Our choice of battery-electric vehicles aligns with our mission of improving air quality and reducing our carbon footprint, while lowering costs at the same time.”

The 12 vehicles, all Class 3 Lightning Electric Transit Vans, were developed by Lightning eMotors, a manufacturer of commercial electric vehicles for fleets based in Loveland, Colo. The vans are built on Ford Transit 350 HD chassis and are upfitted by NorCal Vans/Driverge of Chico, Calif., to meet ADA requirements with support for wheelchair lifts and other customizations.

Porterville configured their zero-emission Lightning Electric Transit Van with seats for seven passengers and a wheelchair securement area. They have 86 kilowatt-hours of battery capacity with a range of 120 miles. The vans can be charged in just over an hour by a 50-kW DC fast charger.

Fully owned by the City of Porterville, the new vans were partially funded with special funding from the California Air Resources Board (CARB) Hybrid and Zero Emission Truck and Bus Voucher Incentive Project (HVIP). The voucher program reduces the upfront cost of advanced zero-emission fleet vehicles and requires manufacturers to have CARB and HVIP certification to participate.

The City of Porterville offers its on-demand curb-to-curb, ride-hailing service for only $3 to its residents. The new electric vans will be a part of that service beginning in May.

“Our Lightning Electric Transit 350HD passenger van is ideally suited to the emerging micro-transit model,” said Tim Reeser, chief executive officer of Lightning eMotors. “Our vehicles are produced in a modular configuration to support features such as wheelchair lifts, aftermarket HVAC systems, and third-party seating configurations. The combination of performance and range, as well as the quiet and smooth passenger experience that comes from riding in a battery-electric vehicle, all contribute to making it a great choice for door-to-door transit.”

Unlike scheduled transit buses, on-demand routes are not consistent. “This makes it critical to know each vehicle’s location and state of battery charge at all times,” Reeser said. “With that in mind, the City of Porterville’s new electric vans have telematics software that provide drivers real-time range, diagnostics, and efficiency data. We integrated the telematics software that the city is using from ViriCiti with Lightning Analytics, our cloud-based analytics system that provides predictive maintenance, route scoring, range analysis, driver behavior, and geofencing for maximum range and efficiency.”

The sophisticated data capture and analysis provided by the telematics software is key, Tree said. “Being able to monitor the batteries in real time and understanding how long it’s going to take to charge back up is extremely important to ensure that we operate the transit service efficiently,” he said, “especially with on-demand vehicles, where residents expect to get a ride in under 15 minutes.” To learn more, visit the City of Porterville’s transit website at www.ridept.com.