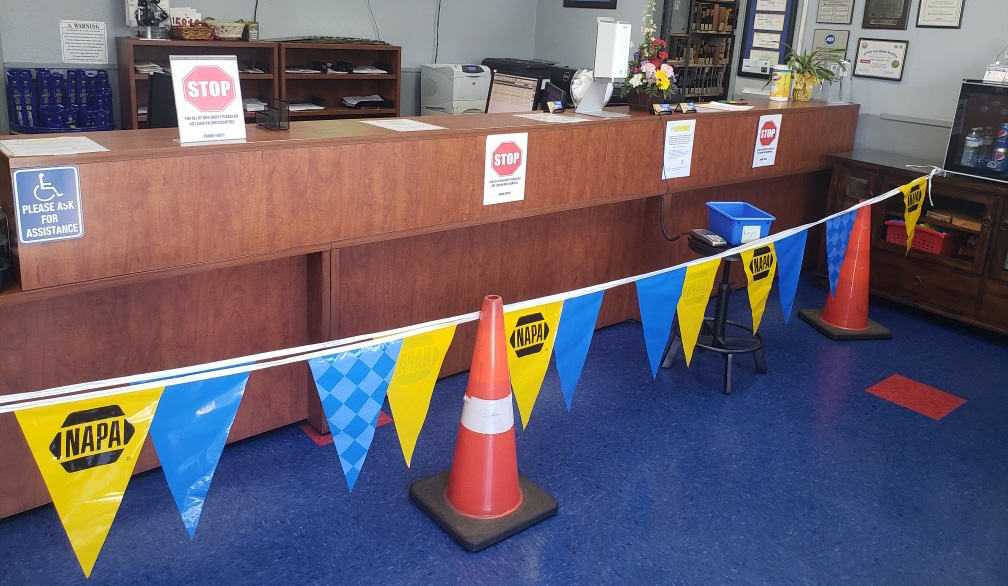 John Eppstein, of John's Automotive Care, closed off his shop's waiting room with a barrier to prevent customers from approaching the counter.

San Diego—Of John Eppstein’s two shop locations in San Diego and La Mesa, car count has been dipping down at one and keeping volume at the other, though he’s been balancing the lower car count with selling more work for those customers who come in.

“Even though we’re slow, our sales numbers aren’t totally in the tank,” said Eppstein, who owns John’s Automotive Care and is the president of ASCCA. “We’re not going to have a great month, but we won’t have a terrible one, either.”

While staff hours have been cut back, Eppstein hasn’t had to furlough or layoff any employees. “We’re talking all the time to discuss how everyone is doing, what they’re experiencing and if anyone needs anything when we’re out shopping. We’re doing what we can to keep people feeling good and not overwhelmed.”

The shop stopped providing its shuttle service and is now using Uber, which Eppstein will help share the customer’s cost. He has also closed off the shop’s waiting room.

“We placed a little barrier with cones to keep people away from the counter — we had put signs up, but customers were still walking right up.”

Many of John’s Automotive’s latest online reviews are customers stating how thankful they are for the shop’s precautions for their health.

All vehicles are disinfected during intake and again on delivery, as well as keys, payments can be made via phone without signatures, and repaired cars are available for pick up after hours.

“Many of these practices were already part of our offerings, though more people are taking advantage of them now,” Eppstein said. “Customers are still maintaining their vehicles, unlike 2008 when they stopped servicing them, then had a $5,000 bill when they went back to shops. Anything we can do for them, such as vehicle pick up and drop off, we will.

“We’re also spending a little more time with customers to help them remain calm. And wherever they can, shops need to make financial cuts to keep the cash flowing — talk with your vendors and partners about getting deferred payments.”

Eppstein is hopeful that as people become accustomed to the new “normal,” they’ll continue to get their cars serviced more than they are presently, but he said it’s inevitable some businesses will have to close their doors and there will be attrition in the industry. Eppstein has already heard several dealership service centers have closed.

The $2.2 aid package that just passed will help, he said. “Shops just have to hang on long enough to get that support — that’ll be huge.

“The most important action right now for shops is to get the word out that they’re still open and what they’re doing to keep customers safe.”