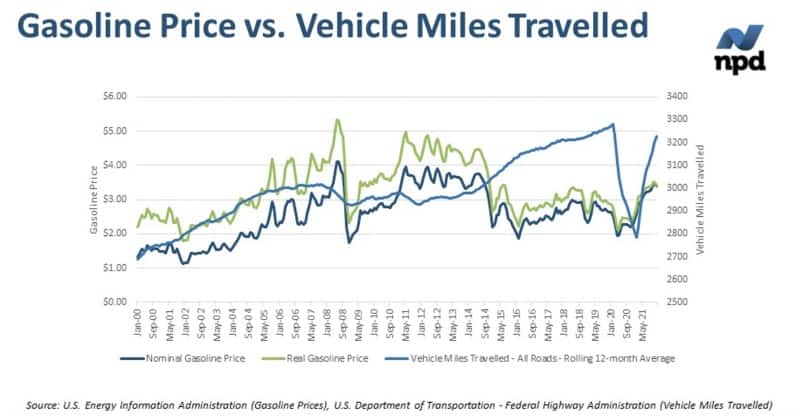 Gasoline Prices and the Aftermarket: Let’s Not Panic

The automotive aftermarket industry has always paid close attention to the miles-driven metric because it has always been tightly correlated with industry performance. The COVID-19 pandemic changed that perspective a bit, and for good reason. Early on we observed a significant drop in the number of miles driven, while industry sales performance accelerated at a rate not seen in recent history.

Over the past two years, consumer behavior has shifted in a way that benefits the aftermarket. While our core consumers continue to spend, millions of new consumers are now engaging with us. Our industry has, therefore, fared well throughout this pandemic.

In recent months, gasoline prices have become a key focus topic for some in the industry, as gas prices rose above $3.50 per gallon. The last time nominal gasoline prices had crossed the $4.00-per-gallon mark was in mid-2008. At that time, we observed a downturn in miles driven and industry aftermarket industry performance.

Although gasoline prices briefly hit $4.00 in mid-2008 ($5.30 when adjusted for inflation), by the end of that year prices fell to $1.74 per gallon. The average number of miles driven turned negative at that time, but one could argue that it wasn’t just gasoline prices that caused this downturn. Many other economic factors affected consumer behavior, including a major economic recession and stock market plunge, a doubling of the unemployment rate, and a national housing crisis.

As the years went on, the economy began to recover. At the same time, gasoline prices began creeping up, once again crossing the $3.00 mark in early 2011. Despite this economic recovery, it was clear that higher gasoline prices continued to negatively affect miles driven, throughout this period.

As I write this post, average gas prices in the U.S. have reached $4.17 per gallon, the most expensive in history (not correcting for inflation). The effect of these higher gas prices on consumers is very real, but the macro environment is different than it was in the past, and there appears to be a new baseline in the aftermarket because of the fundamental behavior shifts that have positively affected sales performance. After all, it is now easier for consumers to cut back on driving: working from home has become much more common; e-commerce shopping and grocery and food delivery are more accessible; and road trips, the current go-to travel option, are easier to cancel than airline tickets.

Even so, higher gas-price increases can still deliver a meaningful jolt to consumers’ wallets. This is especially true for lower income consumers and do-it-yourself (DIY) customers who might delay vehicle repairs, extend maintenance intervals, and seek out cheaper brands and products.

We can expect to see some negative effects on aftermarket sales caused by higher prices at the pump but the extent of those effects is not as easy to predict. We cannot assume that higher gas prices will cause the same measurable decline in miles driven that were noted in the past.  However, the longer gas prices remain higher than average, the more it could impact household budgets. Even if we don’t see a measurable drop in miles driven, other behavior changes around vehicle maintenance could also drag down overall industry performance.

March 2022 was already set up to be a tough comparison period, due to the end of government stimulus payments and the vaccine rollout in March 2021. And the effects of higher gas prices will add additional noise to the analysis. The next two months will be a crucial period for the automotive aftermarket — likely becoming a period of comparison we will all point to in the years to come.