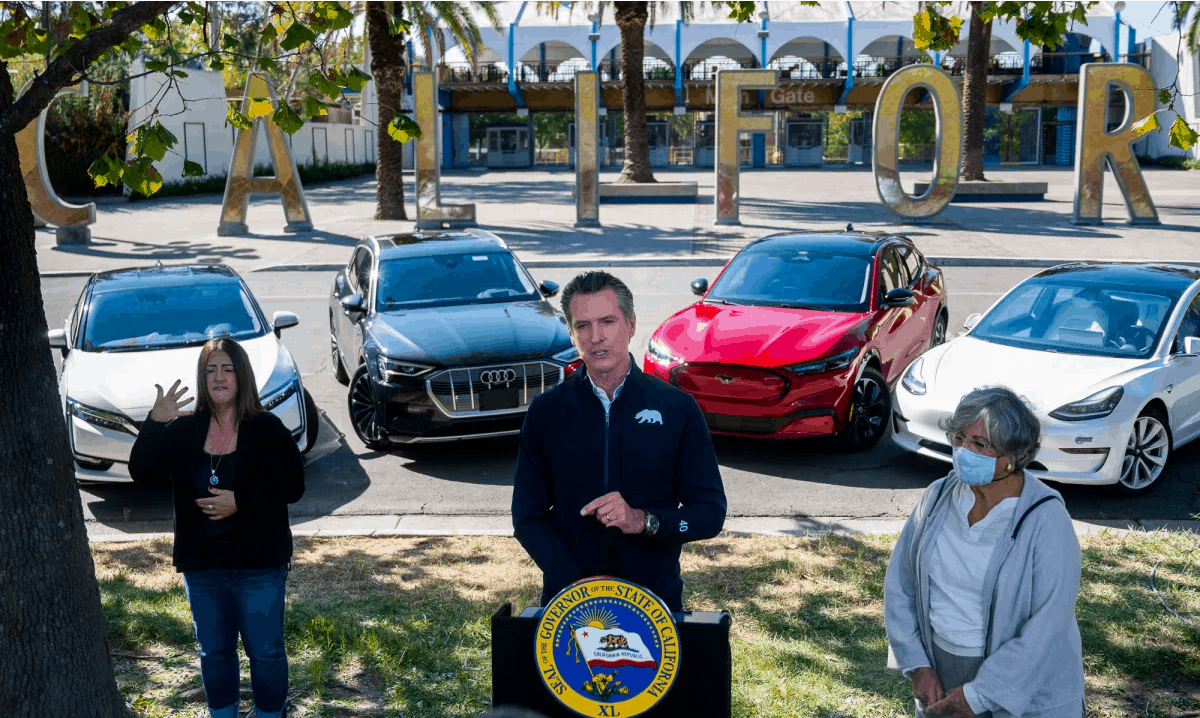 California Gov. Gavin Newsom stands in front of four electric cars to announce an executive order requiring all new passenger vehicles sold in the state to be zero-emission by 2035. California Air Resources Board chair Mary Nichols is on the right. AP/Pool photo.

“This significant transportation policy change is deeply troubling and deprives Californians of a direct voice in this important issue,’ argues the CNCDA

“While we greatly respect the Governor’s ambition and emphasis on California leading the fight to combat climate change, we have many unanswered questions about fundamental components of his Executive Order to ban the sale of gasoline-powered vehicles by 2035, including the implications on consumers and the state’s preparedness to take on such a directive.

“Foremost, if the policy is ultimately adopted, this will transform how Californians move about our state. Such a significant public policy change and drastic shift in how Californians operate every single day requires addressing, upfront, critical elements to how this directive will be met including:

• Consumer Adoption: Despite California leading the U.S. in Zero Emission Vehicle (ZEV) market share, adoption is limited to the wealthy and represents a fraction of the 2 million new passenger and light-duty vehicles sold annually.

• Consumer Affordability: ZEVs are thousands of dollars more expensive than comparable gasoline powered vehicles, if they are available at all.

• Infrastructure: California lacks the charging infrastructure — and the financial plan to achieve it — needed to support this mass shift in transportation needs.

• Mandates vs. Goals: Banning new non-ZEV vehicles and limiting choice, even 15 years from now, is significantly more difficult than striving to achieve the goals the Governor has set forth.

• Current Standards Are Not Being Met: We already have aspirations about how many ZEVs are supposed to be on the road in California, yet we are currently falling short of those goals.

“Additionally, bypassing the elected Legislature and directing the California Air Resources Board (CARB) to adopt rules to prohibit the sale of non-ZEV vehicles to enact this significant transportation policy change is deeply troubling and deprives Californians of a direct voice in this important issue.

“While we support the state’s goals to combat climate change, there are many questions and factors that need to be thoughtfully considered and addressed before implementing such a mandate on consumers.”