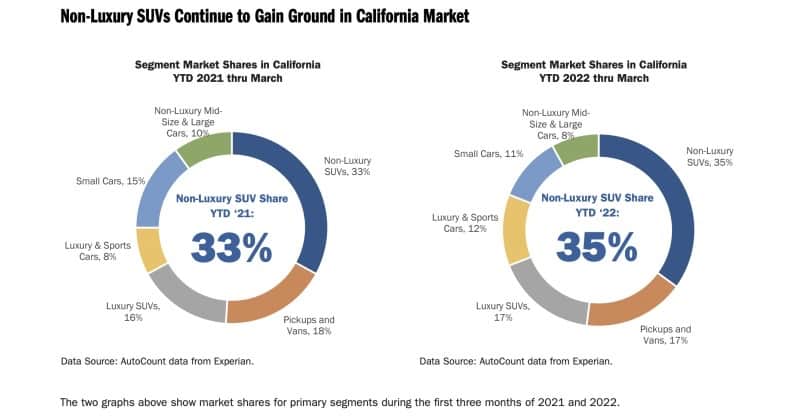 High demand for new and used vehicles will provide a boost to vehicle market despite a weakening economy; larger, family-friendly vehicles lead the pack

Sacramento, Calif.—As expected, the high pent-up demand for both new and used vehicles is holding strong and will provide a boost in California’s vehicle market despite a weakening economy.

While the current economic impact of low unemployment and high inflation is felt across nearly every industry in the nation, the demand for both new and used vehicles remains strong in the state. While lower economic growth and weakening consumer affordability is hitting most industries hard, new vehicles registrations in California are expected to only soften a bit in the coming months as the California New Car Dealers Association (CNCDA) expects about 1.8 million new vehicles to be sold in the state during 2022, down slightly from 2021 but better than the 1.64 million in 2020.

“As the vehicle market continues to navigate high demand, chip shortages, supply chain issues and production problems, the current economy could allow dealerships to help replenish their inventories as manufacturing of new vehicles is able to catch-up with demand,” said California New Car Dealers Association Chairman John Oh, General Manager of Lexus of Westminster. “We are thankful California isn’t being hit as deeply as other regions in the nation across all vehicle registration sectors. Additionally, we are seeing some increased interest in the electric vehicle market that are very promising.”

Larger, family-friendly vehicles continue their reign as those most sought by consumers, bringing their market share to 35 percent, down 1 percent from last year. Small cars saw a larger decline, hitting 11 percent, down from 16 percent last year. Luxury SUVs saw a 2 percent increase from last year, making up 17 percent of sales, with non-luxury mid and large sized cars remaining relatively stagnant at 9 percent, and the luxury and sports car segment increasing to 11 percent.

The Tesla Model Y reigns as the top selling car in the California market with 42,320 registrations so far this year. In second place: the Tesla Model 3 with 38,993 units sold, further indicating the statewide demand for EVs. New registrations of the Honda Civic, Toyota Camry and Corolla, the state’s top-selling mainstays, were impacted by inventory shortages but still remained at the top of their segment categories.

The San Francisco Bay market seems to be the least affected by the decline in sales, posing the smallest statewide percentage drop at 12.9 percent. Overall statewide sales in the first two quarters of 2022 dropped 16.4 percent lower than in 2021. Northern California was slightly more insulated with a 15.9 percent drop to Southern California’s 16.6 percent.