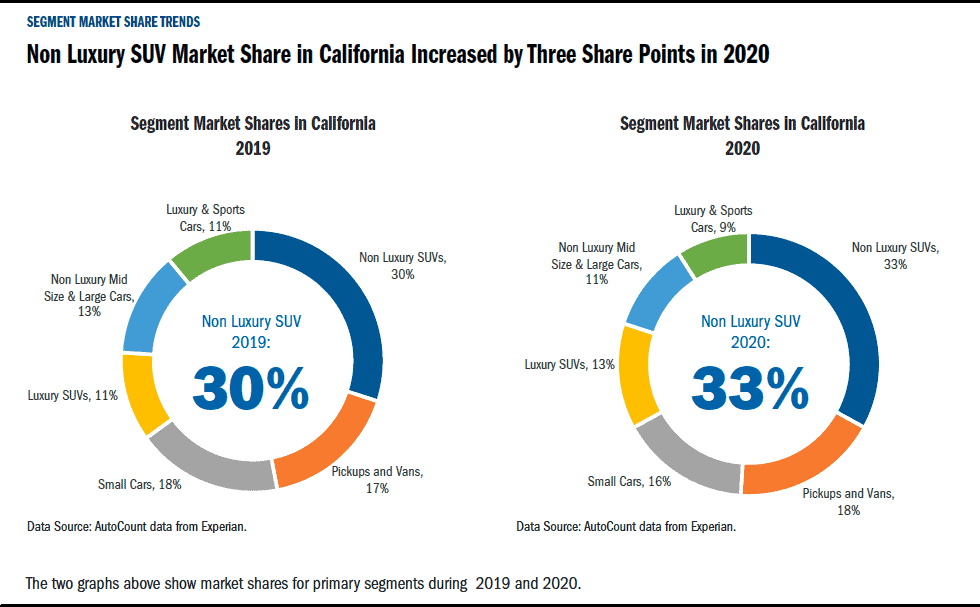 Sacramento, Calif.—The California new vehicle market is expected to improve by 8 percent from 2020 to 2021. New light vehicle registrations are predicted to increase by approximately 130,000 units this year, according to the California New Car Dealers Association’s “California Auto Outlook” report.

The increase follows the 450,000 unit drop in 2020, as sales were impacted by the pandemic. Despite the decline last year, the market was still 58 percent higher than in 2009, the low point in sales during the Great Recession.

‘True Truck’ share of state retail market is below 40 percent

In 2020, light trucks accounted for 64.1 percent of the state market, up sharply during the past several years. But due to the sometimes fuzzy standards the industry has used to classify vehicles, these frequently cited light truck market share figures can send a misleading signal regarding an apparent shift to bigger vehicles.

For example, many sub compact and compact SUVs (i.e., Buick Encore and Honda CR-V) are essentially passenger cars with a hatchback, a higher center of gravity, and more ground clearance. But these vehicles are traditionally classified as light trucks and are included in the same broad segment category as full size pickups and large SUVs. In many ways, small CUVs are more similar to compact cars than to
6,000 pound trucks.

The analysis below presents an alternative picture of truck market share in California by re-mapping these traditional breakdowns. The two orange shaded circles comprise what we are calling True Trucks — mid size and full size SUVs, truck-based small SUVs, pickups, and vans.

The two blue circles consist of passenger cars and small crossover SUVs. By removing small CUVs from light trucks, true truck market share in the state during 2020 was well below half of the market — 36.7 percent.

It’s increasing, up by seven points from 2016, but the combined total for passenger cars and small CUVs accounts for the dominant share of the market.