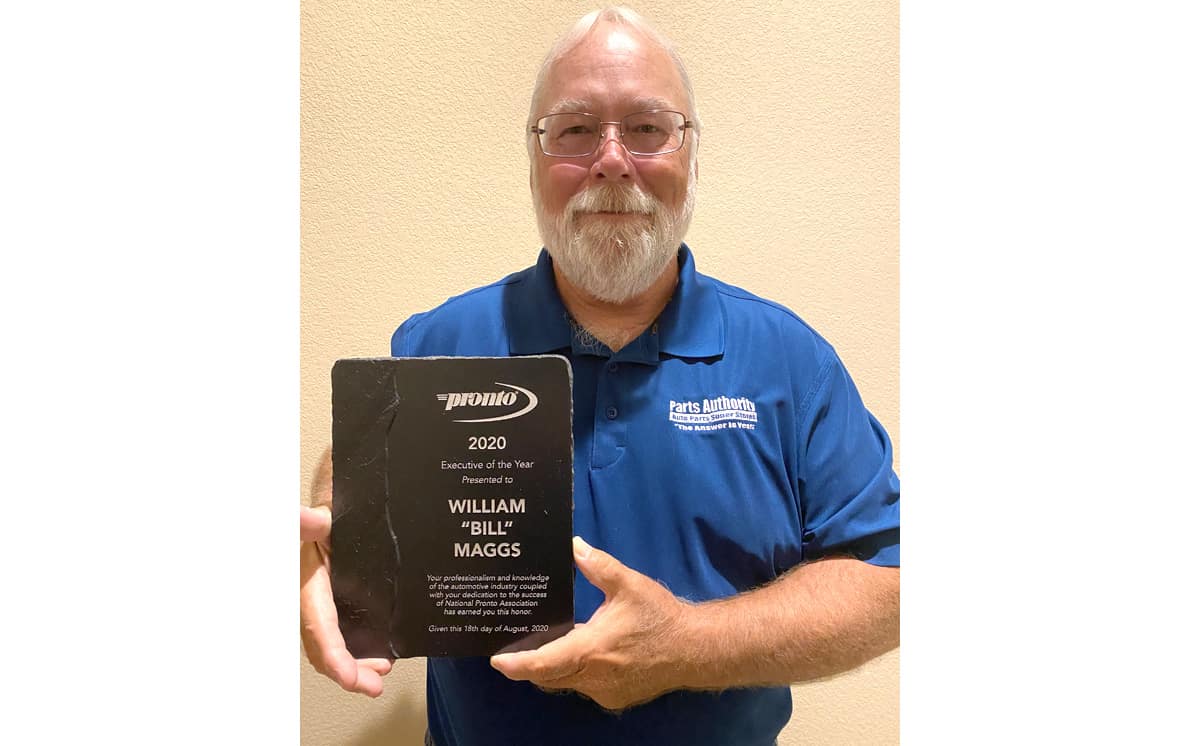 ​“This was probably the easiest choice of a winner ever. It goes without saying that no one could ever be more deserving of this award than Bill Maggs,” says Robert Roos, president, National Pronto Association.

Bill Maggs honored as National Pronto Executive of the Year

“To put it simply, there would be no Pronto without Bill Maggs … This was probably the easiest choice of a winner ever”

Grapevine, Texas—Bill Maggs, executive vice president, supply chain for Parts Authority and former CEO of National Pronto Association, was honored as the Pronto Executive of the Year. The award was announced at the recent Automotive Parts Services Group (The Group) virtual national conference and expo.

​“This was probably the easiest choice of a winner ever. It goes without saying that no one could ever be more deserving of this award than Bill Maggs,” said Robert Roos, president, National Pronto Association. “Bill was there at the beginning, helping to forge Pronto into the program distribution group that it is today. To put it simply, there would be no Pronto without Bill Maggs. He has tirelessly dedicated over 44 years to developing the Pronto legacy for its members. He has been both an employee and a member, and he continues to ‘bleed Pronto blue’ today.”

In October 2019, Maggs accepted his position with Pronto member Parts Authority. He began his aftermarket career at Menco Corporation in Springfield, Ill., where he held a variety of roles of increasing responsibility, including general manager and president. From there, he joined National Pronto Association, where he worked for 40 years, the last 20 as CEO and president. During his tenure at Pronto, Maggs also served on the board of directors of the Automotive Parts Services Group (The Group) and 1Parts, separate joint ventures with National Pronto, holding the positions of co-CEO and co-chairman, respectively.

Maggs has been an active industry advocate throughout his career, including serving as chairman of the Automotive Warehouse Distributors Association (AWDA) and as a member of the Auto Care Association board of directors and the National Automotive Technicians Education Foundation (NATEF) board of trustees. He has earned his Master Automotive Aftermarket Professional (MAAP) designation and received many prestigious industry honors, including the Northwood University Automotive Aftermarket Education Award, the Federated Art Fisher Memorial Award and the Jack Creamer Leader of the Year Award. Maggs currently serves on the AWDA board of governors, as treasurer of the University of the Aftermarket Foundation and is involved in many other industry initiatives.

The Pronto Executive of the Year award is presented annually to an individual who best demonstrates dedication and commitment to Pronto and fellow members. The recipient of the award has demonstrated a commitment to support and enhance efforts on behalf of all members through volunteering of time and effort for the benefit of all.

Published in Association News, National News and On the Move